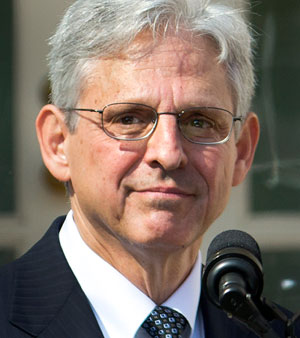 In the nation's capital, there's nothing quite like a U.S. Supreme Court nomination battle for intrigue, political energy and unpredictability. It's a drama that even with relatively noncontroversial nominations features all three branches of government. It begins with a judicial vacancy, followed by the president selecting a nominee; and the Senate then plays its very public constitutional role of "advice and consent."

The Feb. 13 death of Justice Antonin Scalia started the process anew. By the time President Barack Obama nominated as his successor Merrick B. Garland, the chief judge of the U.S. Court of Appeals for the District of Columbia Circuit, on March 16, the lines of confrontation were drawn.

But with Senate Republican leaders sticking by their vow to refuse to give a hearing or vote to the president’s nominee because the vacancy arose in a presidential election year, the nomination process this time around is quite unlike any in most Americans’ lifetime.

“This is a totally unprecedented situation,” says Peter H. Irons, an emeritus professor of political science at the University of California at San Diego and the author of multiple books about the Supreme Court.

Neil S. Siegel, a professor of law and political science at Duke University, with an eye toward U.S. political history, would amend the description of “unprecedented.”

“I think we’re dealing with territory we haven’t ventured into for 150 years,” says Siegel, a former special counsel to then-Sen. Joseph R. Biden Jr. during the confirmation hearings of Chief Justice John G. Roberts Jr. in 2005 and Justice Samuel A. Alito Jr. in 2006.

While some have drawn parallels between the current situation and the rejection of President Lyndon B. Johnson’s proposed elevation of Justice Abe Fortas to chief justice in 1968, Siegel is going back another century to the other President Johnson.

In 1866, the nomination of Henry Stanbery, President Andrew Johnson’s attorney general, to the high court was the victim of lawmakers who did not want to show any support for Johnson. A congressional majority opposed to the president’s Reconstruction policies went so far as to reduce the size of the Supreme Court from the then-prevailing 10 members to seven, thus eliminating the position to which Stanbery was nominated.

Siegel says that none of the congressional reactions to that nomination “have been viewed as worthy of emulation by subsequent generations.”

Neither Senate Majority Leader Mitch McConnell, a Republican from Kentucky, nor Sen. Charles E. Grassley, a Republican from Iowa and the chairman of the Judiciary Committee, have gone so far as to propose reducing the current size of the Supreme Court to deny a seat to Garland.

McConnell, speaking to ABC News in late March, said “the principle” for his position is that “the American people are in the middle of choosing who the next president is going to be. And that next president ought to have this appointment, which will affect the Supreme Court for probably a quarter of a century.”

But some view the Republicans’ refusal to provide a hearing or allow a vote on the nominee to be just as obstructionist as the Reconstruction Congress.

“There is simply no precedent for the Senate refusing to act,” says Ronald A. Klain, a longtime Washington hand who has played key roles in Supreme Court nominations under both Presidents Obama and Bill Clinton.

Vice President Biden, who shepherded numerous Supreme Court nominations through the Senate Judiciary Committee as its chairman or ranking minority member, rejected Republicans’ interpretation of a 1992 speech of his that they say supports the idea of not confirming high court nominees during a presidential election year. (The Republicans have dubbed it “the Biden rule.”)

Republicans “completely ignore the fact that, at the time, I was speaking of the dangers of nominating an extreme candidate without proper Senate consultation,” Biden said in a March 24 address at Georgetown University Law Center.

“I made it absolutely clear that I would go forward with the confirmation process, as chairman — even a few months before a presidential election — if the nominee were chosen with the advice, and not merely the consent, of the Senate—just as the Constitution requires,” the vice president said. “There is no Biden rule. It doesn’t exist.”

While the debate over whether to take up Garland’s nomination escalated, the work of the foot soldiers in the confirmation battle proceeded.

Progressive groups such as MoveOn.org and Credo Action have organized demonstrations in states with Republican senators and have also hired small airplanes carrying banners that say “Do your job.” Another campaign, called We Need Nine, has been holding daily sessions outside the Supreme Court building featuring children, teachers, law students, physicians and others calling for full consideration of Garland.

Meanwhile, groups on the right have geared up as well. The Judicial Crisis Network, a Washington group that has been a leading voice both in opposition to Garland and to the idea of giving him a hearing or vote, launched ads painting the nominee as too liberal, with $2 million in digital and other media buys in D.C. and six states.

The normal focus of such efforts is the Judiciary Committee hearing, typically held two to three months after the nomination is announced.

“There is no sign the committee is undertaking the things it would normally undertake” to weigh a Supreme Court nomination, says Klain, who is now the executive vice president and general counsel of a company called Revolution and a former chief counsel of the panel under Biden who later went on to work in both the Clinton and Obama administrations. Presumably, there will eventually be a confirmation hearing to fill the Supreme Court vacancy, whether it is for Obama’s nominee or someone else.

“If Garland were to get a hearing, we could actually learn a lot about the type of justice he would be,” says Paul M. Collins Jr., an associate professor of legal studies in the political science department at the University of Massachusetts at Amherst.

Collins and Lori A. Ringhand, an associate dean and professor at the University of Georgia School of Law, recently published a paper in the journal Law & Social Inquiry that examines how the Judiciary Committee’s role in Supreme Court confirmation hearings has changed over time.

They conclude that while the failed 1987 nomination of Robert H. Bork to the court after a bruising Judiciary Committee hearing is viewed by many as the dawn of the modern, rough-and-tumble era of confirmation hearings, the committee’s role grew much more incrementally over decades.

While Sandra Day O’Connor’s 1981 hearings were the first to feature gavel-to-gavel television coverage, it was the 1986 hearings into the elevation of William H. Rehnquist to chief justice—the year before the Bork hearings—that made senators realize the power of the televised platform.

“They learned to address the concerns of their constituents,” Collins says.

Irons of UC-San Diego still views the confirmation process as divided into two eras: before Bork and after Bork.

“That’s when everything went south,” he says, in reference to the tumultuous battle to fill the vacancy created when Justice Lewis F. Powell Jr. retired.

This article originally appeared in the May 2016 issue of the ABA Journal with this headline: “Holding Court: Refusal to hold hearings on the nomination of Merrick Garland is unprecedented — almost.”