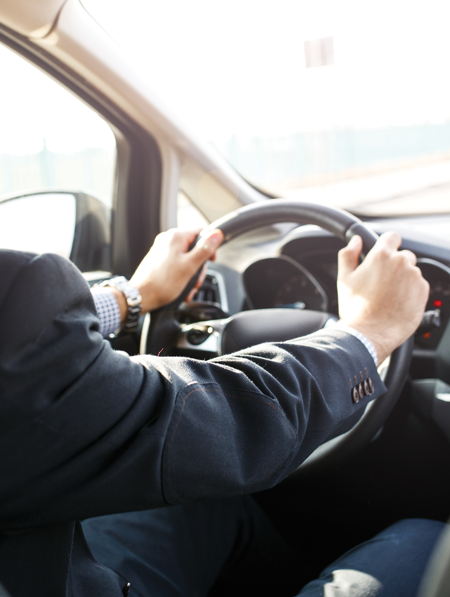 Gump and his friend Manveen Chahal had met for drinks at a bar in the Bay Area suburb of Menlo Park, California, in May 2014. It was late and Gump was planning to travel the next day, so he decided to call a car through the ride-booking app Uber. But he and Chahal are blind and use service dogs, and when they tried to get into the car, the driver yelled “No dogs!”

Gump tried to explain that the dogs were allowed under the Americans with Disabilities Act, but the driver yelled insults and profanity. Then he drove away, hitting Chahal with an open passenger door and narrowly missing Gump’s dog. They filed a police report after the incident.

That story, and several more like it, made it into a legal complaint about two years later. National Federation of the Blind v. Uber Technologies alleged that Uber was violating the ADA by failing to ensure equal access to blind riders.

Against a traditional taxi company, the case could have been easy. Taxis are considered to be in the “travel service” category, the suit says, which includes on-demand transportation. That might apply to Uber, as well. But the ADA doesn’t define travel services, according to the suit. And Uber insists it’s not a transportation company at all—it’s a technology company that brings parties together for a transaction.

No court has tested that issue squarely yet; the NFB case ultimately settled. And the federation later settled a similar claim against Uber competitor Lyft without litigation. But if courts agree, users in the “sharing economy”—businesses that use technology to connect people who sell goods or services with customers—would have little recourse against discrimination.

“It doesn’t take a science degree to understand that [Airbnb has] a platform that allows for someone to directly discriminate,” says Ikechukwu Emejuru of Emejuru & Nyombi, the Silver Spring, Maryland, law firm that represents the Airbnb plaintiff. “There are a lot of people out there who are being harmed.”

It’s illegal to discriminate in “public accommodations”—generally, businesses open to the public—on the basis of disability, race, color, religion or national origin under the ADA and the Civil Rights Act of 1964. Some states have laws that cover even more classes of people.

But in a law review article published last year, “The New Public Accommodations,” University of Denver law professor Nancy Leong and law clerk Aaron Belzer argue that those laws might not be enough to fight discrimination encountered by clients of sharing-economy businesses. The authors think they can be used against such businesses. But the businesses disagree, and the question hasn’t really been tested in court.

One reason for this is the companies are fairly young; another is early settlements. But a big reason, lawyers say, is that sharing-economy businesses often invoke arbitration clauses when they’re sued. Users automatically agree to those arbitration clauses by signing up for accounts.

That’s what happened in Emejuru’s case that alleged racial discrimination by Airbnb. His client, Gregory Selden of Washington, D.C., was told by an Airbnb host that a room he’d requested was unavailable. But when Selden found the same place listed as available shortly afterward, he got suspicious and created two more accounts, using pictures of white men. When he inquired as white customers, the accommodations were suddenly available.

Selden complained to the host, who said Selden was “simply victimizing [himself].” When Selden brought the matter to Airbnb, he claims, it never responded. That’s when he sued. But the matter never got aired in district court because Airbnb invoked its arbitration clause. Selden is appealing the arbitration order.

The situation is slightly better under the ADA because that law confers standing on people who are deterred from using a service because of known disability discrimination. That’s one reason the NFB case was able to avoid being sent to arbitration, says Disability Rights Advocates staff attorney Julia Marks, who’s based in Oakland, California, and was part of the case.

“But it is something that we always have to think of when we get phone calls from people complaining of discrimination [from] some of these companies,” she says.

As a result, the majority of discrimination lawsuits against sharing-economy businesses have ended before they got to the question of platform versus accommodation. NFB might have gotten the furthest, but it still didn’t address the question squarely. A judge found that the issue should be developed further and declined to dismiss the case.

Leong thinks the best way to show that anti-discrimination laws apply is to cite the design of the apps through which users of sharing-economy businesses reach sellers.

“They design the entire platform that makes the transaction possible, which means they determine what the parties to the transaction know about one another, when they know it, how that information is presented to the parties, and the norms of the platform,” Leong says.

It’s not clear whether anyone has made that argument. Selden’s complaint uses a different strategy suggested by Leong and Belzer, seeking to hold Airbnb vicariously liable for the actions of its “employee”—the host who rejected his requests.

Petrof says he thinks Uber is clearly subject to the ADA (although he sees several categories it could fit into) because it has substantial control over its drivers’ operations—pricing, dispatch, driver qualifications and other aspects of the experience. Much of that control explains why consumers might choose Uber, he says.

“The consumer is in no way negotiating with an individual driver in the process,” he says. “This is all accepting a proposal that Uber is making to the consumer.”

When contacted for this article, Uber said that its drivers are required to comply with the ADA, and that it’s piloting different ways to add drivers with wheelchair-accessible vehicles. Petrof says wheelchair users in Chicago are typically directed to UberTaxi, which connects them to a traditional taxi dispatch service. Asked what Uber would have to do to add wheelchair-accessible vehicles to its core business, spokeswoman Sophie Schmidt maintains that Uber doesn’t operate passenger vehicles but provides its software to “driver-partners.”

But customers might not be impressed. Those looking for an alternative to Airbnb now have options in two competitors: Noirbnb and Innclusive, both founded by African-Americans.

On Twitter, Innclusive has been using #AirbnbWhileBlack to promote itself. “If you booked on @innclusive, you wouldn’t have to use a fake profile on Airbnb,” the company tweeted in February.

This article originally appeared in the May 2017 issue of the ABA Journal with this headline: "When Sharing Isn’t Caring: While the ‘sharing economy’ provides inexpensive services, it also allows small businesses to skirt civil rights laws."