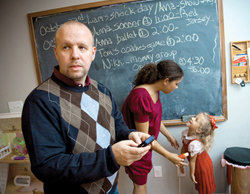 On a Wednesday afternoon in early September, Nikki Adcock Williams got the call every working parent dreads this flu season: Her 2-year-old son, Liam, was running a high fever and his preschool suspected H1N1, the highly contagious swine flu virus that had surfaced in their suburban Atlanta neighborhood.

A staff attorney for a Georgia state court judge, Williams was preparing for the next day’s criminal motion hearings. She couldn’t make a quick escape, so she frantically called her husband, Thomas, who was able to slip away from his job as an assistant district attorney. With no family in town and no backup babysitter, Williams, a 33-year-old mother of two, spent the next few hours “bribing another staff attorney” to handle the rest of the week’s hearings. Unfortunately that only filled the gap until Monday, when the judge wanted Williams back.

H1N1 has added a new dimension to the sick-kid dilemmas that are a seasonal plague in two-income households. Public concern has meant longer absences (some day care centers require children to stay home for seven days after the onset of H1N1 symptoms) and a more conservative approach for deciding when it’s safe for kids to return to school or day care. White House advisers said in August as much as half the population could be infected with H1N1 this fall and winter. And if predictions pan out, that means more lawyers than ever could face this tough work-family balance issue.

“It’s a legitimate concern,” says Audrey Rubin, a Chicago-based attorney, management consultant and former chief operating officer at Wildman, Harrold, Allen & Dixon. “But law firms should be prepared to handle this anyway. People get into car accidents, people get the stomach flu. What the law firms should do is be sure their people are equipped to work remotely.

“I think the big issue for the law firms is [overcoming] the old belief that if you don’t see people, they aren’t working,” she says. “That should have gone away by now anyway. This is more evidence of why. It’s not valid.”

The Williamses talk about how law firms must change to help working mothers.

“We have a pretty strong culture [that says] if people need to stay home, they should,” says Adams, who is based in the firm’s Memphis office. “With technology being what it is, most of our attorneys have some combination of BlackBerrys or Treos … and laptops. It’s just not that unfamiliar for attorneys to do work outside the office.

“But [individual attorneys] have to reach out and get help. You know the people in your practice group who are capable of substi­tuting for you.”

Experts say this is true for all lawyers, even those who don’t come from large firms. Solos especially need to plan ahead, making sure they have systems in place to deal with the unexpected, says Alexis Martin Neely, a Redondo Beach, Calif.-based estate planning attorney who trains other lawyers to build successful businesses. And, she says, lawyers need to be honest about what truly requires their exclusive attention.

“Can somebody else do it? Nine times out of 10 you’re going to find that, yes, somebody else can do it,” Neely says. “But you need to build those support structures in advance. Don’t wait until the swine flu comes.”

Even in the best circumstances, patching together a suitable solution isn’t easy, as Williams discovered. Liam had symptoms for four days, but could not return to school until he had been fever-free for an additional seven. In the end, his father used his own sick leave so he could stay home with the boy.

“Even when I was home, the of­fice still called me with questions that I needed to answer, even though I had a really sick kid with a very high fever,” Williams says.

“I was up until 1 a.m. the night before I went back, trying to get caught up.”