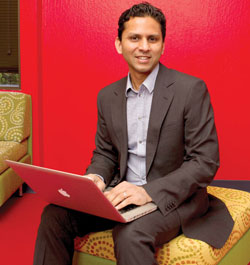 As long as there’s been an Internet, the Q&A site has proven a durable genre. Now LawPivot is spinning the traditional Q&A site in another direction, allowing startup entrepreneurs to pose private legal questions to as many as 10 knowledgeable lawyers. The questioners peruse the replies and can begin a conversation—or legal representation—if they desire.

CEO and co-founder Jay Mandal sees LawPivot as a way to leverage technology for client acquisition. “LawPivot enables a more efficient client delivery system where there’s now an inefficient path” of mixers and lunches, Mandal says. He says that several attorneys have been hired as a result of communication generated by the site.

Before founding LawPivot, Mandal was the lead mergers and acquisitions lawyer at Apple. He has additional experience as a corporate lawyer at Nishith Desai Associates and Pillsbury Winthrop Shaw Pittman.

LawPivot hasn’t settled on a revenue generation model—the site is free for both startups and attorneys. But the business model LawPivot eventually follows piques the interest of virtual lawyering pioneer Richard Granat, who follows law technology issues on his eLawyering Blog and serves as co-chair of the ABA’s eLawyering Task Force.

Granat predicts: “By next year there will be hundreds of these free legal-advice services offered directly by lawyers from their websites as the virtual law firm movement begins to scale.”

Granat notes that a fee-splitting model for financing the site is unethical in most jurisdictions.

California—the only state where LawPivot operates—is one of the few states that allow sharing of fees between attorneys and a state-qualified, for-profit legal referral service. However, except under specific circumstances between lawyers, fee-splitting is unethical there, as in other states.

Mandal wants to take the service to other states, but he is confining it to California now to see the concept work in its home market.

Due to an editing error, the April story “Asked and Answered” attributed incorrect information to attorney Richard Granat. Granat’s statement that fee-splitting is an ethical prohibition in most jurisdictions was combined with a later paragraph, which he did not say, asserting fee-splitting is legal in California. California is one of the few states that allow sharing of fees between attorneys and a state-qualified, for-profit legal referral service. However, except under specific circumstances between lawyers, fee-splitting is unethical there, as in other states.