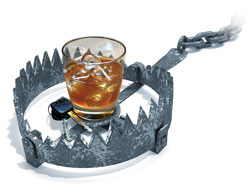 Many of us remember when popular prime-time potboiler Dallas ruled the airwaves and nasty J.R. Ewing—in efforts to get custody of his son—would set traps for his long-suffering wife, Sue Ellen, trying to “prove” she was an unfit parent.

Now, suppose it was Sue Ellen with the bag of dirty tricks and you’d have a situation much like one that unfolded numerous times in Contra Costa County, Calif.

Apparently a cottage industry was developing for divorced or divorcing wives who wanted leverage in child custody hearings. Money, guns and drugs are alleged to have been exchanged for various setups that resulted in men being plied with alcohol and promptly arrested for driving under the influence.

No one was the wiser until the arrests of a former private investigator and a former Contra Costa drug agent early in 2011 in connection with the sale of confiscated drugs. And when they started to sing, the pieces fell into place.

What emerged were tales of backstabbing and diabolical machinations that would have fit right in with the goings-on of a certain soap opera.

Mitchell Katz, a Livermore winery owner, states in a lawsuit filed in December in U.S. District Court for the Northern District of California that after he told his wife, Alicia Spenger, he wanted a divorce, she conspired with a private investigator and a host of others to concoct an elaborate ruse wherein he was led to believe that a TV producer wanted him to take part in a winemaking reality show.

According to the suit, the scam included meetings, emails and even a camera crew visiting the winery. After one of the meetings—and after several drinks —Katz got into his pickup truck, drove off and was immediately followed by Danville patrol officer Stephen Tanabe, who was allegedly in on the scheme. Tanabe pulled him over and issued the DUI.

Another man, David Dutcher, tells a similar story. It seems his estranged wife concocted a fiendishly clever plot to impugn his character.

Dutcher made the acquaintance of a tall blonde on Match.com in 2008. She was a San Jose Sharks fan, just like him, who hinted at an appetite for sex. And she had a female friend who seemed just as adventurous. At a bar they poured shots for Dutcher and invited him to join them at a house with a hot tub.

Dutcher got into his vehicle to follow them and was promptly stopped by a waiting cop and issued a DUI.

Christopher Butler, a former police officer and private investigator, appears to be the common thread in the set-ups. He was arrested in connection with the “dirty DUIs” and other offenses.

It could be argued that these men did, in fact, overimbibe and get behind the wheel, but it was the official misconduct that was the overarching factor.

Dutcher’s conviction was expunged from his record in September, but the incident proved to be quite effective in hampering his efforts to secure better visitation privileges with his children.