Solo Solutions: Is there really a better way to bill? 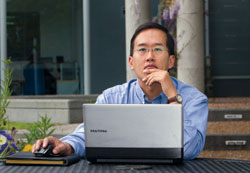 This month, we introduce a new addition to our solo and small-firm coverage: Solo Solutions. From time to time, our solo and small-firm readers will tell the ABA Journal how they solved a problem in their practice or created a helpful innovation. We hope you learn something. And we’d love to learn from you. If you have a solution or innovation you’d like to share, drop us a line. Send story ideas to [email protected]

IS THERE REALLY A BETTER WAY TO BILL?

Andy Chen, a Silicon Valley engineer-turned-lawyer, thinks so. Like other solo and small-firm attorneys, Chen finds billing to be an exercise in inefficiency. He has always recorded his time, but found he’d have to take a day or two at the end of each month to compile and calculate his bills. “It became really disruptive for me,” says Chen. And inconvenient if a billable matter—or emergency motion—intervened.

Chen tried some commercial billing systems designed for solo and small-firm practice, but he never found them very intuitive or easy to use. “If I am not wild about the software, I don’t see the point of using it or paying for it.”

Chen, a former process engineer, is comfortable with workflow design and spreadsheets. Hailing from Silicon Valley, he’s also comfortable with technologies that might give other lawyers pause, like cloud computing. And, he says, most of his clients are tech-savvy. Chen already was familiar with Google’s software offerings, like its spreadsheet and cloud, but hadn’t considered turning the free tools into the billing system of his dreams until an Alaska-based client retained him to represent her in a child custody case in the Silicon Valley area. It was the first time Chen could not meet in person with his client, and he tried to make her feel in control of the emotionally fraught case despite the distance.

Chen began using Google’s spreadsheet program as a way to detail his work on the Alaska client’s case and then stored it securely on the cloud so his client could see his work on her behalf whenever she wanted. “She could feel like she was actively involved even though she was 2,500 miles away,” he says. From there, Chen programmed the spreadsheet to convert his work and time into an easily calculable bill. “It’s no more work to keep the spreadsheet because you had to keep records anyway. And it helps me with organization because I always know where to find the records on the Google drive.”

Chen then began sharing files and documents with the client on the cloud so she could see them whenever she wanted.

Chen began using his “online ledger” system in 2011, and now he uses it for almost every client. While he has a few holdouts who are technophobes, he is now largely relieved of the previous hassle he had with calculating clients’ bills.

Chen also suspects that his online ledger has improved collections. “Most clients want to pay or don’t know who to pay or how much money to allocate. So as long as they know on a fairly short-term basis how much money it is costing them, then their ability to pay goes up.” Some clients, after viewing the online ledger, have even asked Chen to hold off on work because they do not have the funds to pay him. “It definitely cuts down on my losses. If you make everything you do more transparent, there are lots of benefits.”