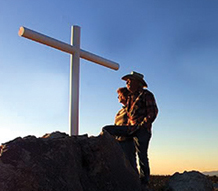 The court will decide the constitutionality of
an 8-foot cross honoring fallen soldiers.
Photo by Donald Douglas

The U.S. Supreme Court’s newest justice, Sonia Sotomayor, is its first Latina and the third woman. But she is also the third New Yorker on the bench. Soto­mayor, who was raised in the Bronx, joins Justice Ruth Bader Ginsburg, who is from Brooklyn, and Justice Antonin Scalia, who grew up in Queens.

None has been shy about voicing views during oral ar­guments. So the retirement to New Hampshire of the reserved, soft-spoken Justice David H. Souter may result in turning up the volume.

In Sotomayor’s first term she will be called on to decide First Amendment disputes involving religion and free speech. She will also be part of an Eighth Amend­ment case on whether sending a juve­nile burglar to prison for life amounts to cruel and unusual punishment.

Sotomayor will put to use her experience from years on the bench in New York City deciding cases on business law, antitrust and intellectual property. The court is set to decide whether mutual funds can be sued over their high fees, whether the National Football League can be sued for violating antitrust laws, and whether a novel business method can be patented.

The new term also features a pair of cases that will decide the rights and duties of lawyers to give legal advice. One involves defendants who are immigrants; the other involves clients who face bankruptcy.

The conventional view has been that the court’s ideological balance will stay the same, since Sotomayor is expected to join the liberal bloc, replacing Souter’s vote. An early test could come in a lingering dispute over the separation of church and state, Salazar v. Buono, due to be heard Oct. 7. At issue is whether the government can maintain a cross in the Mojave National Preserve in California to honor fallen soldiers.

Under Chief Justice John G. Roberts Jr., the court has yet to rule squarely in a First Amendment case on the establishment of religion. And the law has remained muddled on whether religious symbols may be displayed on public property.

In 2005, the court took up two Ten Commandments cases and issued a divided verdict. In Van Orden v. Perry, a 5-4 majority upheld the placement of a granite monument inscribed with the Ten Commandments that had sat for more than 40 years on the grounds of the Texas state capitol. Another 5-4 majority struck down a new display of the Ten Commandments in county courthouses in Kentucky in McCreary County v. ACLU. Only Justice Stephen G. Breyer was in the majority both times, and he said “no exact formula” can decide these cases. Context counts.

The Mojave cross was erected by the Veterans of Foreign Wars and has stood for more than 70 years in a remote spot. But when a former National Park Service employee sued, the 9th U.S. Circuit Court of Appeals at San Francisco ruled the cross amounted to an uncon­stitutional endorsement of religion. Solicitor General Elena Kagan is urging the court to uphold the display of the cross and to rule the plaintiff had no standing to sue. This tactic may prove a winner. Two years ago, in Hein v. Freedom from Religion Foundation, the court threw out a First Amendment suit against President George W. Bush’s faith-based initiative by ruling the taxpayers had no standing to sue.

In U.S. v. Stevens, scheduled to be heard Oct. 6, Kagan is trying to fend off a First Amendment challenge to a federal law that makes it a crime to create or sell videos and photos of animals being wounded or killed. Robert Stevens, a Virginia man, was the first person convicted under the measure when he sold to federal agents three videos with gruesome scenes of pit bulls fighting. His conviction was overturned when the 3rd U.S. Circuit Court of Appeals at Philadelphia struck down the law as a free-speech violation.

The government argues the expression is worthless and harmful. “Like obscenity, the depictions are of patently offensive conduct that appeals only to the basest instincts,” Kagan wrote in her brief.

In two cases from Florida, defense lawyers are urging the court to rule as unconstitutional prison terms of life without the possibility for parole for those under age 18 who commit crimes other than murder. Sullivan v. Florida concerns a now-33-year-old man who was convicted at age 13 of the burglary and rape of an elderly woman. Graham v. Florida concerns a 17-year-old who violated his parole and was given a life term for an armed burglary when he was 16. According to Amnesty International, at least 2,225 people in the United States were serving terms of life without parole in 2005 for crimes committed as juveniles. However, only two—including Joe Sullivan—were as young as 13.

The ABA filed an amicus brief in the two cases, arguing that closing the pris­on door on a juvenile is unjust and unwise. “Sentences for juvenile offenders must recognize that, no matter how adult-like their offenses, they are not adults,” the brief says. “The ABA is not asserting that all juveniles … are entitled to parole.” However, the ABA brief states, they “should not be denied that opportunity.”

On Oct. 13, the court will hear another case of special interest to the ABA. It concerns the duty of lawyers to fully advise their clients on the consequences of a guilty plea. A Vietnam veteran, Jose Padilla, pleaded guilty to marijuana trafficking in Kentucky after his lawyer incorrectly told him this state conviction would not affect his immigration status. Padilla was not a U.S. citizen but was here as a legal permanent resident. Under federal immigration law, his conviction for an aggravated felony called for his automatic deportation. In Padilla v. Kentucky, his new lawyers say the mistaken legal advice amounted to ineffective assistance of counsel and call for him to receive a new trial.

Another case involving legal advice, Milavetz, Gallop & Milavetz v. U.S., deals with lawyers who counsel cli­ents with serious financial troubles. A lawyer might, for example, suggest refinancing a mortgage as a way to avoid bankruptcy. But giving this advice might be deemed illegal under the 2005 Bankruptcy Reform Act. The law was intended to crack down on people who advertised for clients and promised to make their debts disappear. It forbids advising clients to take on more debt.

Edina, Minn., attorney Alan Milavetz sued on behalf of his family firm, seeking to exempt lawyers who give good-faith legal advice. The court will decide whether the bankruptcy provision applies to lawyers and, if so, whether this limit on legal advice violates the First Amend­ment. (See “A Debt-Defying Act,” January.)

This term’s big patent case, Bilski v. Doll, will decide whether a business method can be patented if it is not part of a machine or does not transform physical matter. Bernard Bilski and Rand Warsaw created a mathematical formula that permits businesses, schools and homeowners to hedge the risks of energy costs resulting from fluctuations in the weather. They were denied a pa­tent, however, on the grounds that the formula, though useful, was an abstract idea that did not transform a machine or matter.

In their appeal, Bilski’s lawyers say this rigid rule threatens thousands of patents, including those for computer software. And they stressed that the pa­tent law itself says “any new and useful process” can be patented. (See “Wrangling Genes,” July, page 56.)

There are few checks on the high fees charged by advisers to mutual funds. But about 52 million American households have money in these funds—more than $10 trillion total. In Jones v. Harris Associates, the court will decide whether funds can be sued for awarding their advisers fees well in excess of those charged by other comparable funds. Last year, the 7th Circuit at Chicago threw out a suit alleging excessive fees because the charges were properly disclosed to the fund’s directors.

Finally, in American Needle v. National Football League, the justices will decide a legal question that has long hung over pro sports. Are their leagues a “single entity” and, therefore, immune from antitrust laws, or can these independently owned teams be sued for conspiring to restrain trade? A suburban Chicago maker of stocking hats and caps, American Needle sued in 2004 after it was shut out from using NFL logos. The league had made an exclusive deal with Reebok. The suit was thrown out by the 7th Circuit, but the justices agreed to decide whether pro leagues are shielded from antitrust charges.