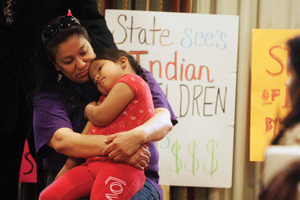 Madonna Pappan hugs her daughter Charlie, one of two children the state took from her and her husband. AP Photo


Pappan and her husband were not permitted to present any evidence supporting their continued custody, according to a subsequent lawsuit. After her husband asked the judge what he was allowed to say in court, the judge changed the subject and awarded temporary custody to the state, ending the hearing. This violated the couple's due process rights, the lawsuit alleges.

That would be a legal issue for most couples. But Pappan is a member of the Oglala Sioux tribe, so her custody proceeding was subject not only to South Dakota law but also to the federal Indian Child Welfare Act.

Under that 1978 law, the state must show that it has made active efforts to prevent removal, but that continued parental custody is likely to result in serious damage to the child. Ordinarily, states decide custody matters according to the best interests of the child. But the ICWA imposes additional federal standards making it harder to remove American Indian children from their parents. This was adopted to curb decades of unrestricted child removal from Indian homes, which had begun to threaten tribes' existence as well as children's stability.

However, courts in Pennington County, which contains Rapid City, routinely fail to hold social workers to the ICWA's higher standards, the lawsuit argues—even though judges enter findings saying they have.

The plaintiffs claim that the custody hearings, rather than obtaining facts, are instead designed to "ratify the opinions of [the South Dakota Department of Social Services] and allow DSS to continue retaining custody of Indian children for a minimum of 60 days."

In a 45-page ruling, issued on deadline March 30, U.S. District Judge Jeffrey Viken backed all seven of the ACLU's claims, ordering South Dakota to provide parents with adequate notice before emergency removal hearings; allowing parents to testify at those hearings and to cross-examine witnesses; and requiring courts to base their rulings on evidence presented. The court also said the state violated the ICWA. "Indian children, parents and tribes deserve better," Viken wrote.

South Dakota is not the only state accused of violating the ICWA. The Alaska Supreme Court is considering —for the second time—whether to rehear an adoption case that pits an Alaska Native grandmother against a non-Native Anchorage couple. In Native Village of Tununak v. State of Alaska, the grandmother alleges that the state did not follow the act's mandate to try placing "Baby Dawn" with her extended family, other members of the same tribe or other Natives before choosing a non-Native couple.

More cases could be coming. Stephen Pevar of the American Civil Liberties Union, the lead attorney in Van Hunnik, says he's "really gotten deluged" by allegations of similar problems in other states, including Minnesota and Alaska.

FEDS ON THE CASE

U.S. Attorney General Eric Holder announced in December that the Justice Department is actively seeking state cases in which the federal government can advocate for adherence to the ICWA. It has filed amicus briefs supporting the tribes in both Tununak and Van Hunnik.

"Anytime the United States comes to a state court and says, 'We think you local justices got a national issue wrong,' I think most state judges perk up," says James J. Davis Jr. of the Alaska Legal Services Corp., an attorney for the tribe called the Native Village of Tununak.

American Indians have more than a century of troubled history with child removal. In the late 1800s, the federal government made it mandatory for Indian children to attend boarding schools to assimilate the children into American culture.

In the 20th century, the child welfare system produced the same effect. Well-meaning social workers removed a disproportionate number of Indian children from their homes, sometimes because they perceived poverty as neglect or didn't understand tribal customs. By 1974, the Association on American Indian Affairs estimated that 25 to 35 percent of all Indian children nationwide were being raised by non-Indian families—so many that tribes were at risk of dying out.

Congress responded with the Indian Child Welfare Act, which lays out special procedures states must follow when removing American Indian children. Among other things, it requires states to make "active efforts" to prevent removal and to give parents a copy of removal paperwork. Indigent parents have the right to an attorney. Recognizing that children are vital to tribes' futures, it gives tribes concurrent jurisdiction over off-reservation cases, the right to notice and the right to intervene.

Though the act turns 37 this year, states have had trouble following it. A 2005 report (PDF) by the Government Accountability Office found that 32 states had at least some compliance problems. Last year, a group of American Indian organizations asked the Justice Department to investigate "widespread non-compliance" with the ICWA.

The National Indian Child Welfare Association was one signatory to that letter. The group's executive director, Sarah Kastelic, says NICWA receives hundreds of calls a year about "rampant noncompliance" with the act. Kastelic adds that the association's compliance trainers are "consistently surprised" by how poorly social workers, attorneys and judges understand the law; nor do many Indian families understand their rights, she says.

"The trauma ... that resulted from those removals is something that can never be undone," Kastelic says. "We hear weekly from adult adoptees who were removed from their families when they were kids and who are still trying to cope with that as an adult."

By contrast, placement preferences are at the center of Tununak. Baby Dawn's grandmother "Elise" and her tribe renewed Elise's bid to adopt the child after Dawn's non-Native foster parents filed adoption papers. In 2013, the Alaska Supreme Court found that the lower court read the ICWA incorrectly, which gave Elise another chance to make her case.

But four days after that decision, the U.S. Supreme Court handed down Adoptive Couple v. Baby Girl, an ICWA case in which a Cherokee father opposed the adoption of his daughter by non-Natives. In part, the ruling said the ICWA mandate to place an Indian child with either extended family, other members of the same tribe or other Indians is not applicable if no such party "has come forward." The Alaska high court reversed itself in October, saying Elise could not be preferred because she had never filed a formal adoption petition.

Native groups say the formal adoption requirement is a radical misreading of Baby Girl. They also say the requirement would place a huge burden on Alaska Natives, whose communities are typically very small, poor and hundreds of air miles from a courthouse. The village made those arguments when it petitioned for another rehearing.

One of its attorneys, Davis, says getting a second rehearing is a long shot. But the tribe got a boost in November from the Justice Department, which filed an amicus brief in support of rehearing. The Alaska high court accepted it in January and ordered briefs from the parties.

Kastelic says there are concerns that if Tununak stands, it could set off a series of state court rulings that weaken the ICWA and hurt extended families' chances to adopt.

Pevar of the ACLU says Van Hunnik has generated several first-ever rulings on the act. Kastelic points in particular to the "really exciting" first-ever class certification for parents and tribes.

And both say the involvement of the Justice Department could improve ICWA compliance—even outside court.

"Hopefully it will have a deterrent effect where state officials will look at these matters more closely," Pevar says. "And ... if the department comes in and puts its thumb on the scale, not only state officials but federal courts that are hearing these cases will listen."

This article originally appeared in the May 2015 issue of the ABA Journal with this headline: "Tribal Rights: South Dakota class action highlights violations of the Indian Child Welfare Act."