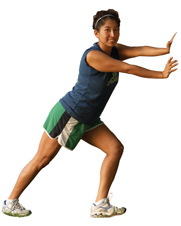 As a working mother, Alma Hernandez-Blackwell already has plenty of challenges in her life.

But she’s decided to add one more: running a marathon. A self-described average athlete, Hernan­dez-Blackwell always has wanted to take on the 26-mile challenge. “To me, it’s the ultimate test of what your body can do … without going to any extremes in training,” she says.

So she’s set a goal of running her first marathon before her 30th birthday. And with the clock rapidly ticking down, Hernandez-

Blackwell has trained her sights on one of two Texas marathons that are scheduled for late 2007.

While Hernandez-Blackwell can’t exactly be accused of having couch-potato tendencies—she regularly exercises four to five times a week—she also isn’t a long-distance runner. Since setting this goal last year she’s gone from running a maximum of 4.5 miles to completing her first half-marathon in a respectable two hours and 15 minutes.

But she also understands that training for and completing a full marathon is a lot different than a half-marathon, and she wants to know how she can most effectively train for one in light of her current schedule. In addition to working full time as a lawyer, caring for a toddler and being married to a lawyer in private practice, Hernandez-Blackwell is studying for the Texas bar exam.

“I am extremely crunched for time, especially right now. I’m pretty much limited to running during my lunch hour during the week, and am lucky to get in a run on the weekends,” she says.

Life Audit health and fitness expert Jim Karas applauds Hernandez-Blackwell for recognizing that training for a full marathon is much different than a half-marathon, and says if she uses her time efficiently and properly she should be able to say “I did it” before she turns 30.

The good news for Hernandez-Blackwell is that mara­­thon training is formulaic, says Karas. If she picks the marathon she plans to run and works backward from the date of the event she should have no problem training for it.

The bad news, however, is that amateur athletes can seriously injure themselves and derail their plans if they don’t make a training and conditioning schedule a priority. “If she has any type of imbalance anywhere in her body, the pounding of a run will exacerbate the problem that much faster,” Karas says.

While she is not overweight, Karas says Hernandez-Blackwell should start training at the lightest possible weight for her body in or­der to ease the inevitable joint and muscle problems that come with the territory of marathon training and could injure her.

Though her increased running will help boost Her­nandez-Blackwell’s metabolism, it also can be a double-edged sword, Karas cautions. He often sees runners gain weight because the intense exercise makes them ravenously hungry and they tend to turn to the wrong kinds of foods to satiate themselves.

To avoid this trap, Karas tells Hernandez-Blackwell to create a diet that balances carbohydrates and proteins. “Many people who run overdo it on the carbs,” he says. “Yes, carbohydrates are the fuel. But you need to balance it out with the right proteins. Protein takes the edge off the hunger.”

Any carbohydrates that Hernandez-Blackwell consumes should come from fruits and vegetables, not from breads and pastas.

Instead of eating three large meals a day, switch to five or six small meals to keep hunger in check, Karas suggests. Also work in regular healthy snacks like fruit, low-fat yogurt or cottage cheese, or low-calorie protein bars. Once her body’s running on the right kind of fuel, Hernandez-Blackwell can next focus on the actual physical training involved in preparing for a marathon.

Although exercise is a regular part of Hernandez-Blackwell’s life, she is not doing the right type to prepare for the marathon, Karas says. He wants her to drop the kickboxing and body-pump classes she takes at her health club and instead focus on long-distance running and appropriate weight training.

According to Karas, most marathon training programs are about 20 weeks in duration, with the last eight weeks being the most intensive. Right now Hernandez-Blackwell should be regularly logging about 25 miles each week to be on track for an end-of-year marathon, but she is not. So Karas suggests she focus on building up her current running mileage by fitting in three to four runs a week that gradually ratchet up the mileage to the 25-mile weekly goal. She should not run every day, he says.

In addition, Hernandez-Blackwell needs to work in a twice-weekly weight-training regimen using heavier weights and low repetitions to help strengthen her entire body. After Hernandez-Blackwell has been able to achieve the 25-mile weekly mark, Karas says she needs to increase her weekly mileage by 10 percent. She also has to make sure that one of her weekly runs is a long run of at least 10 miles.

“If she is pressed for time, she should run three times a week,” Karas advises. “Two of the runs should be seven miles to eight miles and the third should be the 10-miler.”

At least a month before the marathon, Hernandez-Blackwell will need to have completed one 20-mile run, though ideally she would have at least three 20-mile runs under her belt before the event.

After that, it’s all about sheer willpower. “I know she has done a half-marathon. But there is a huge difference between 13 miles and a full marathon,” Karas says. “And that difference is the last 6.2 miles. The first 20 miles are a breeze. Then you hit the wall.”

And all the training in the world is unlikely to make a difference when the amateur runner hits the wall. At that point, says Karas, “it is just mind over matter.”

Jim Karas is the author of the new health and fitness book, The Cardio-Free Diet. A graduate of the Wharton School of Business, he is the owner of Solo Sessions Personal Fitness Training in Chicago. He also appears regularly on ABC’s Good Morning America.

1. Identify the marathon you plan to run.

2. Give yourself 20 weeks to train, and plan to train most intensely over the last eight weeks.

4. Run three to four times a week, building up to 25 miles per week.

5. Gradually increase total weekly mileage, building up to at least one 20-mile run.

6. Stay healthy and have fun.

Are you regularly logging 10 miles a week on the treadmill and still can’t shed a pound? Get off that road to nowhere and take up interval strength training instead, says Life Audit health and wellness expert Jim Karas. By adding strength training to the mix, you can maintain and build lean muscle, your body’s most metabolically active tissue—activating weight loss.

WE NEED YOU! Got some room to improve? Get free advice from the experts on health and fitness, finance, work-life balance, travel and law office design—plus your mug in this mag—with Life Audit, the Journal’s monthly lifestyle feature. It’s fun, fast and free. If you would like to participate in a future Life Audit, please e-mail Jill Schachner Chanen at [email protected]