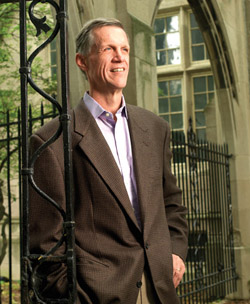 David Van Zandt: "Law firms are way behind the curve on this." Photo by Matthew Gilson

Jones Day, which pushed back its on-campus interviews at one first-tier law school by a month, wishes for a real spring awakening, its hiring partner says. If he had his druthers, Gregory Shumaker might push back OCIs to springtime so law firms could evaluate first-semester 2L grades, rather than first-year GPAs only. “I’m still very much intrigued by the concept of spring OCI,” he says.

But for now, his firm has decided to use September dates for interviews at Northwestern University’s law school. Shumaker says Jones Day’s prominence may help make it a leader on the issue.

“In some ways it’s one small step by one big law firm to help alleviate the pressure that is on students,” he says. “I think it’s also something that other firms may well pay attention to, the firms that share the kinds of concerns about compression and the mad rush.”

Shumaker recalls that things were different when he went to law school in the 1980s. Law firms visited campus usually after Labor Day and conducted interviews during September and early October.

“It worked for decades without this kind of craziness where everybody runs to campus in the same 15 days in August,” he says.

He acknowledges the later date could disadvantage Jones Day if desired students accept offers at other law firms before their September interviews with his firm. But Shumaker isn’t worried.

“Sure, it’s possible that some students will jump at other offers,” he says, “but we think that the vast majority of students are sophisticated enough to look at all the different firms.”

Shumaker says Jones Day has talked about pushing back interviews at other schools, and may do so later.

Worried about their competitors, law firms quickly snap up those with the highest grade point averages. Law students about to enter their second year of school have little time to decide what firms are the best places for them and little time to refine their interviewing skills.

Other professional service firms put job applicants through a much more rigorous process than the flurry of on-campus interviews and callbacks, he says. “Law firms are way behind the curve on this” and need a better process to determine what types of characteristics they are seeking in job candidates.

Van Zandt’s hope is that a later interview date “provides the ability for firms and students to look at other characteristics besides the traditional ones, to make more thoughtful decisions.”

Shumaker says the September interview date will give students some breathing room and could help differentiate the law firm.

But Jones Day didn’t like a different proposal that was also intended to address concerns about early on-campus recruiting for summer associates. The plan by NALP, later abandoned, was to push back the date for summer associate job offers until mid-January of the second year of law school.

“One of the key issues,” says Shumaker, “was the fact that everyone was going to join arms and agree that no offers would go out until January.”

Now Jones Day is trying to “continue the dialogue and come up with a better approach,” says Shumaker. “We weren’t trying to be a naysayer.”