Stuck in the Rut 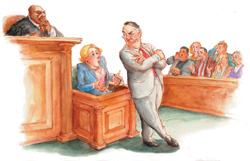 Spencer Reynolds—the famous litigator—was in town to try what was touted as a $5 billion corporate fraud case in Judge Standwell’s federal district court.

The trial was on the front page of the papers for days, and all the local lawyers who were able to took time out to watch it. Like Maria Archuleta said, “If I can pick up just one or two new creative techniques, it’ll be better than spending weeks at one of those fancy ‘trial tricks’ programs.”

Three weeks later—after Reynolds had quietly left town with a verdict of less than $5 million—a group of us were sitting in Zapata’s Chili House, talking about the bits and pieces of the case that we each had seen.

“Reynolds did all right,” said Sandy Kilgore, “but it was hardly a virtuoso performance.”

“No,” said Bill Hightower, “it wasn’t well-done. I don’t think any of his witnesses made a very good impression.”

“I agree,” said Sandy. “And it wasn’t their fault. Rey­nolds’ questions were so long and convoluted that his witnesses were having trouble understanding what he wanted.”

“I’m not a fan of his sarcastic cross-examinations,” said Beth Golden. “That may be entertaining on TV shows like Chicago Law Dogs, but not in real life. Juries identify with the parties and witnesses—not with the lawyers.”

“And another thing,” said Flash Magruder. “Plain­tiffs win their cases with their opening statements. But Spencer had a mishmash of so many different points in his opening, I had trouble figuring out what the case was all about.”

“Sad, but not unusual,” said Beth. “You can see that kind of opening every day in state and federal court. Meticulously over-thorough, boring, tediously repetitive, argumentative and totally unpersuasive.”

“Why is that?” said Angus, who had seen almost the entire trial.

“One part of it is the kind of people who want to be lawyers in the first place,” said Dick Mudger. “Often it’s those who think the way to win is to have the answer to every conceivable question.”

“I don’t know about the rest of you,” said Billy High­tower, “but this is getting depressing. I’m the first one in our family who ever went to college, much less got a professional education. They’re proud of me because they think it’s important to help other people who get stuck in situations they can’t get out of by themselves—not to behave like an arrogant twit who thinks he’s better than everyone else.”

Angus smiled. “Billy,” he said, “your family’s right. Fighting injustice—helping people who can’t help themselves, doing your best to keep an unfeeling system fair—is one of the most useful things you can do with your life.

“But, interestingly, a legal education actually can turn into a rut that leads to the kind of mediocrity they’re talking about.”

You could tell Angus was about to do one of his lists of ideas, so I got out a pad and started to take notes.

WE’RE NOT TAUGHT TO BE BILINGUAL

Remember your first few weeks in law school? You needed a legal dictionary just to puzzle your way through the cases in torts and contracts, not to mention those ancient decisions in property and the Gordian tangles of rules in civil procedure.

You were so pleased with your new vocabulary that when a classmate told you she had a date for Saturday night, you actually said, “Are you the datee or the dator?”

And sometime during your first semester, an upperclassman told you the secret to success in class was, “If you don’t know the answer, at least make a sound like a lawyer.”

He was right. Law school is three years of immersion education in walking the walk and talking the talk. But not in being bilingual—even though it’s probably the most important part of our work, in or out of court.

With a few exceptions, law schools are not interested in teaching their students to communicate with laypeople, so they leave the job half-done.

If you want to do it well, you have to be self-taught.

A TRIAL IS A MORALITY PLAY

Once you get past the motions that shape and limit what the trial is all about, the law doesn’t have much to do with how you actually present your case. What matters are three interrelated collisions: right versus right, wrong versus wrong and good old right versus wrong.

And it’s here—unless you took trial practice or legal aid or served a marvelous apprenticeship—that you hit the limits of a traditional legal education: real trial strategy.

Trial strategy is about how to handle the interplay of character and candor, power and weakness, deception and vulnerability.

It’s here where the storytellers—the advocates as well as the actual players, the parties and witnesses—take the judge and jury through the twisted paths of simple truths, clever lies, honest misperceptions, cupidity and deception.

Here, working with the gut-stuff of persuasion, is where the true advocate shines, where the guiding rule is.

ARGUE TO THE JUDGE, NOT WITH THE JUDGE

Back in the Paper Chase days, in what was called the Socratic method of teaching law, everyone learned not only how to take a position, but how to stand up for it. (And in those days, you literally had to stand when called on.)

You learned how to take on other students’ points and even argue with the professor who was playing the role of judge.

But unless one of your professors had serious practical courtroom experience, you may not have learned the difference between arguing with the judge and arguing to the judge.

In law school, finding all the issues in the case—not saying how the case should be decided—was the right way to answer almost every exam question.

The students who never understood what the teachers were after didn’t last very long. The winners were the people who could list both sides of all the issues in every question.

It’s true that a good lawyer has to spot every plausible issue in a case. And in law school you had to discuss every possible issue to prove you saw it.

But the practice of law—in or out of court—is not a law school exam.

In real life, you get no extra points for listing every possible legal theory. The practice of law requires you to learn what to cull and what to keep. It’s a lesson too many lawyers never learn, especially in some of the fancy firms.

Throughout law school, you had to accept the facts as stated—whether in the appellate decisions you read, the hypothetical questions the teachers spun in class or the final exam questions you puzzled your way through. In school, the facts were a given and the question was, what are the rules?

In a trial, the rules are a given and the question is, what are the facts? And the dogmatic attitude you learned in school—“These are the facts; just accept what I say”—creates enormous resistance from the judge and jury you are trying to convince in a real trial.

People like their own ideas. Telling the judge and jury how to think invades their domain, and they resent it.

Then how do you talk about the facts?

Show, don’t tell. Don’t tell people how to think—show them. The secret is in storytelling. And the dif­ficulty for lawyers is in turning everything you learned in law school upside down.

When Angus was finished, Billy looked at him and smiled.