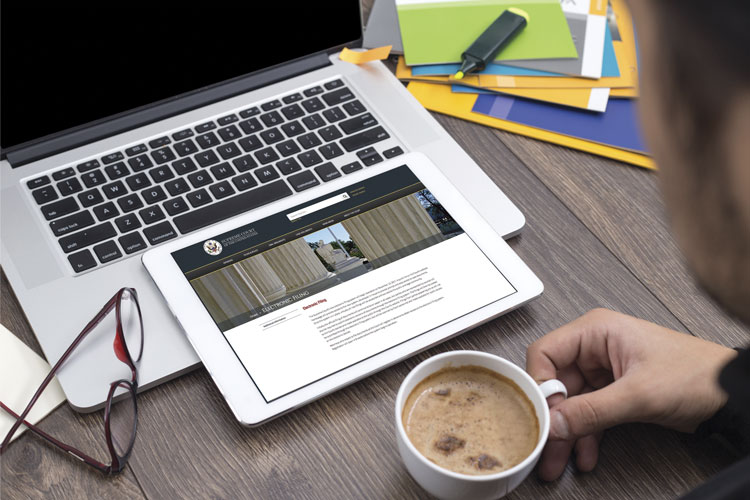 The Supreme Court moves at its own pace when it comes to changes to its traditions and the way it does business. But in November, it is taking a bold leap into the future—one that lower federal courts and many state courts already have taken.

After lengthy deliberation and study, the court will require electronic filing of briefs, initially only by parties represented by attorneys.

“This is obviously a step forward,” says Michael Lissner, executive director of the Free Law Project, a Berkeley, California-based nonprofit that promotes better public access to legal materials online. “They should have taken this step in 1999 or 2000, when everything was moving online.”

The Supreme Court’s electronic filing system is set to launch next month, not quite hitting the target suggested by Chief Justice John G. Roberts Jr. about three years ago.

Electronic filing “may be operational as soon as 2016,” the chief justice had said in his year-end report on the federal judiciary on Dec. 31, 2014.

Roberts said then that the federal courts, including the Supreme Court, “must often introduce new technologies at a more measured pace than other institutions” because of budget, government procurement, security and other concerns.

And “unlike commercial enterprises, the courts cannot decide to serve only the most technically capable or well-equipped segments of the public,” Roberts said, explaining why such systems must be tested for ease of use and compatibility. “Indeed, the courts must remain open for those who do not have access to personal computers and need to file in paper, rather than electronic, form.”

Beginning Nov. 13, any attorney who represents a party or an amicus in the court will be required to submit filings electronically. These include petitions for writs of certiorari, responses, merits briefs, emergency applications and most other filings. However, for the time being, attorneys also must continue to submit paper versions of the same material, and those paper documents will be considered the official filings.

“It is expected that the electronic filing will become the official means of filing, once the system has operated effectively for some period of time,” the Supreme Court said in a Q&A document issued in early August.

Some Supreme Court litigants won’t initially submit anything electronically. These include pro se filers, the incarcerated and others who file under the court’s in forma pauperis rules. The latter already are provided relief from many of the court’s intricate filing rules.

Still, pro se and pauper filings will be scanned by the Supreme Court clerk’s office, with links added to the electronic docket just as there will be for electronic filings by attorneys. While merits briefs and some other filings currently are available on the websites of the ABA and SCOTUSblog, under the court’s new system, the public will have access to a much larger body of filings, including pending cert petitions. And access will be free.

“There is a real hunger for this data,” says Lissner, adding that he expects the Supreme Court’s system to be a better service than PACER, which provides public access to the lower federal courts.

That system charges the public for access tomany filings and is daunting to use, says Lissner, whose group recently has taken all the free written orders and opinions available in PACER and made them accessible on the website Court Listener.

“PACER is not a great system or a modern system,” Lissner says.

“We members of the [Supreme Court] bar are deeply appreciative of everyone in the clerk’s office who is working to make this a reality,” says Katyal, a Hogan Lovells partner who argues frequently before the court (he led all attorneys with six oral arguments last term).

The Supreme Court’s public information office says that clerk Scott S. Harris, who spearheaded the electronic filing project, would be disseminating more detailed guidance about the system in advance of the November start date.

Blake A. Hawthorne, the clerk for the Texas Supreme Court, the highest court for civil matters in that state, heard Harris describe the new system at an August meeting of the National Conference of Appellate Court Clerks.

“This is something I know Scott has wanted to bring to the court since he became clerk” in 2013, Hawthorne says. “He’s got a handle on this.”

Hawthorne’s court has required electronic filing for several years now. The rollout was so smooth that within a matter of months, the Texas court eliminated a requirement that litigants also file paper briefs, he says. John A. Tomasino, the clerk for the Florida Supreme Court, also was at the national court clerks meeting and serves a court that largely converted to electronic filing by 2013.

Tomasino cautions that familiarity with old-fashioned case files can make a paper habit hard to break.

“When you have a physical folder, it can drop behind the desk. But at least you can move the desk and find it,” Tomasino says. “We had 100 years of working with physical files. With an e-file, you don’t want it to fall in the electronic cracks.”

Hawthorne says that although the Texas court has gone all electronic, some judges still ask for briefs filed electronically to be printed out for them.

BRIEFS ON THE BENCH

That prompts some questions about the U.S. Supreme Court’s new system. The court’s elaborate rules for filing briefs, which will remain in place for the time being, dictate that most briefs be printed in easy-to-thumb booklets with color-coded covers. (Examples include light blue for the petitioner’s merits brief and red for the respondent’s merits brief.)

Some justices still like to have the case briefs being argued on a given day stacked before them on the bench. What happens when there is no longer a requirement for printed briefs? Will the justices bring their tablet computers to the bench instead? Will their clerks print out color-coded briefs for them? Those questions will remain unanswered for now.

Gabe Roth, executive director of Fix the Court, a Washington, D.C.-based organization that pushes the justices for greater transparency, applauds the Supreme Court’s move to electronic filing and a redesigned website that was unveiled in early August.

“It’s been a long time coming,” Roth says of electronic filing. “Just the idea that the court is acknowledging that it has to move in a more modern direction is a positive sign.”

But he’s not totally satisfied. Besides being a longtime advocate for televising oral arguments, Roth keeps a steady drumbeat of pressure on the court for his group’s objectives, which include live or same-day audio of arguments in major cases and greater transparency measures regarding the justices’ potential conflicts of interest.

“The court should be given some credit” for the move to electronic filing, he says. “Hopefully, it is a sign of greater transparency to come.”

This article appeared in the October 2017 issue of the ABA Journal with the headline “Filing Forward."