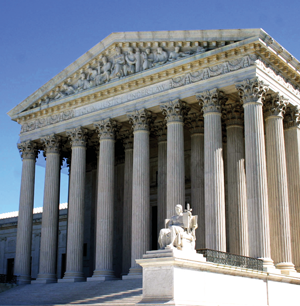 But only one set of facts will be before the U.S. Supreme Court as it takes up an important case about deadly force by law enforcement and whether the Constitution’s protections reach across the border to a non-U.S. citizen.

The case of Hernandez v. Mesa comes amid the wider debate about illegal immigration and the call to strengthen the U.S.-Mexico border, and against a background of a troubling number of cross-border shootings by U.S. agents. The case is scheduled for argument Feb. 21.

“There is a very human story here,” says Deepak Gupta, a Washington, D.C.-based lawyer for the parents of Sergio A. Hernandez Guereca. “There was a boy who was killed by a border guard. Unfortunately, there are many others like him. This case is about whether they can get a remedy in U.S. courts.”

According to the lawsuit filed by Hernandez’s parents, the boy was a soccer lover who wanted to become a police officer. On the day in question, he was playing a game with his friends, which involved daring one another to run up the U.S. side of a concrete culvert that separates Juarez and El Paso to touch a border fence before they ran back down.

While the boys were playing, a border guard on a bicycle seized one of the them, and the others fled across the culvert back to the Mexico side of the narrow stream of the Rio Grande that runs through the culvert, according to court papers.

Hernandez ran past Jesus Mesa Jr., a U.S. Border Patrol agent, toward a pillar beneath a bridge on the Mexican side. Mesa quickly drew his firearm and shot Hernandez in the head, court papers say. Mesa and other Border Patrol agents who swarmed the scene didn’t provide the boy medical aid of any kind. Instead, they got back on their bikes and left, the lawsuit says. Hernandez died on the spot.

The Hernandez family’s version of events will come before the high court as it weighs three legal questions that stem from the family’s civil rights lawsuit in federal court, which seeks to hold U.S. agencies and Mesa, individually, liable in the youth’s death.

Because the defendants—Mesa and the government—won dismissal at an early stage of the case, federal civil rules require appellate courts to accept the plaintiff’s version as true for the purpose of deciding the legal questions before them.

“The pitch here is quite modest,” Gupta says. “It is asking the court to rule that when an officer is standing on the border and using lethal force, there is at least some minimal constitutional protection to the right to life and the right to be free from an extrajudicial execution.”

In Mesa’s version of events, Hernandez threw rocks at the agent when confronted about what might have been the boy’s involvement in the smuggling of aliens into the United States.

Randolph J. Ortega, an El Paso lawyer who represents Mesa, said in a preliminary Supreme Court brief that Department of Justice records show Hernandez had been arrested twice in the United States for alien smuggling and been returned to Mexico because of his juvenile status.

“In this case, you have persons attacking a law enforcement officer on an international border with rocks—the choice of weapon for alien smugglers,” Ortega said in the brief. “When looking at the facts available to Agent Mesa at the time of his encounter with Hernandez, ... it is plain to see that, at the time of the shooting, it could be reasonably assumed by Agent Mesa that Hernandez was breaking the law as an alien smuggler.”

The main legal question in the case concerns the prohibition on unjustified use of lethal force by law enforcement agents as construed under the Fourth Amendment. The Hernandez family’s suit also raised Fifth Amendment protections, but their appeal in the high court relies primarily on the Fourth Amendment.

In the Hernandez family’s case, Gupta asks whether a “formalist” or “functional” analysis applies to the extraterritorial application of the Fourth Amendment right to be free of unjustified lethal force.

Gupta argues that the decision in this case by the 5th U.S. Circuit Court of Appeals at New Orleans—that a non-U.S. citizen who stands just outside the U.S. border and is shot and killed by a law enforcement agent on U.S. soil may not assert a Fourth Amendment claim—is an extreme example of the formalism that the Supreme Court rejected in its 2008 decision in Boumediene v. Bush.

In Boumediene, a case about the rights of detainees of the U.S. Naval Station at Guantanamo Bay, Cuba, the Supreme Court held in an opinion by Justice Anthony M. Kennedy that the Constitution’s extraterritorial applications “turn on objective factors and practical concerns,” not a “formal sovereignty-based test.”

Gupta argues that the 5th Circuit mistakenly applied the reasoning of a four-justice plurality in a 1990 decision, United States v. Verdugo-Urquidez, which embraced a formalistic test that required sufficient connections to the United States for extraterritorial application of a U.S. constitutional right (in that case, the Fourth Amendment’s warrant requirement).

“We’re not arguing for a global Constitution or a global Fourth Amendment,” Gupta says. “It would not be anomalous to our traditions to apply the constitutional protections in this case.”

James E. Pfander, a law professor at Northwestern University Pritzker School of Law who co-wrote an amicus brief on the Hernandez family’s side, says that as in Boumediene, and unlike the situation in Verdugo-Urquidez, there does not appear to be conflict of laws between Mexico and the United States about this case.

“In other words, applying the U.S. Constitution here would not project U.S. law into Mexico in a way that would disrupt expectations there or interfere with any Mexican regulatory interests,” Pfander says.

The government of Mexico also filed a brief on the Hernandez family’s side, saying that it respects the right of the United States to interpret its own constitution. But the 5th Circuit’s decision in this case “effectively means the families of those killed may not obtain any remedy, no matter how unjustified the agents’ actions, if the victims happened to be on the Mexican side of the border when the agent opened fire.”

The DOJ investigated the border shooting and concluded in 2012 that there was insufficient evidence to support a criminal prosecution of Mesa. The federal government also declined Mexico’s request to extradite the agent for prosecution south of the border.

In an initial Supreme Court brief, the U.S. solicitor general’s office said that Hernandez’s death was “tragic,” and that the 5th Circuit correctly concluded that the Constitution did not protect the boy in these circumstances.

The solicitor general’s office argues that the family’s Fourth Amendment claim would fail even under the functionalist approach they urge on the court.

“Since Boumediene, other courts of appeals have recognized that Verdugo-Urquidez continues to govern the extraterritorial application of the Fourth Amendment,” the office said in its brief.

(The Department of Justice has filed criminal charges against a Border Patrol agent in another fatal cross-border shooting.)

protection for the people

The second question granted by the high court involves qualified immunity for Mesa. His lawyer, Ortega, argues that it is undisputed that the 15-year-old victim was a non-U.S. citizen without presence in, or substantial connection to, United States territory when he was killed.

The family “has failed to prove, at the time Agent Mesa found himself in the alleged incident, that any Fourth or Fifth Amendment rights were ‘clearly established’ to protect Hernandez,” Ortega says.

Gupta argues that Mesa learned only after the fact that Hernandez was a Mexican citizen with no connection to the United States. “Here, no reasonable officer in Mesa’s shoes would have thought it lawful to open fire on an unarmed civilian posing no threat to anyone,” Gupta says.

The final question in the case is one added by the Supreme Court when it granted review: whether the family’s claims may be asserted under Bivens v. Six Unknown Named Agents, the 1971 high court decision that found an implied cause of action for those who allege violations of certain constitutional rights by federal agents.

Pfander of Northwestern says that in recent years, the Supreme Court “has been quite reluctant to recognize ‘new’ rights to sue under Bivens, although there’s good reason to believe that Congress has offered some legislative support for more routine rights to sue” for constitutional violations under the Westfall Act of 1988.

This case comes with tragic facts; multiple, complex legal issues; and a charged backdrop against an often-tense U.S.-Mexico border.

At a minimum, Pfander says, “we may learn about the law that applies to interactions along the Mexican border. The officer here faces a challenge in arguing essentially that no law governs his actions, at least no law that might give rise to a civil action for damages. A similar argument for a law-free zone in Guantanamo Bay helped to persuade Justice Kennedy that the Constitution did indeed apply.”

This article originally appeared in the February 2017 issue of the ABA Journal with this headline: "Shot at the Border: Court to decide whether constitutional protections apply to a Mexican boy killed by a U.S. patrol guard."