Supreme Court to consider abortion regulations and the contraception-coverage mandate 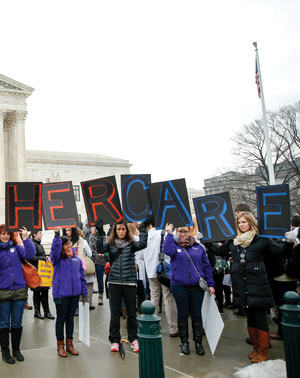 In a U.S. Supreme Court term full of hot-button issues—voting rights, affirmative action, union fees and immigration, to name a few—the month of March will stand out.

Early in the month, the justices will weigh their first major case on abortion in nearly a decade. Weeks later, arguments will come in a challenge by religious colleges and other faith organizations to the contraceptive-coverage mandate stemming from the Patient Protection and Affordable Care Act.

“Both of these cases raise issues of enormous importance for women and women’s health,” says Marcia D. Greenberger, co-president of the Washington, D.C.-based National Women’s Law Center. “They both deal with reproductive health care for women.” But, she adds, “the legal issues are very different.”

Zubik v. Burwell is a statutory case that touches a number of recent flashpoints: contraception, President Barack Obama’s health care law and religious conscience. The abortion case, meanwhile, revives a debate that has been ongoing for more than 40 years.

Whole Woman’s Health v. Hellerstedt, set for argument on March 2, involves a constitutional challenge to a 2013 Texas law that adopted new abortion regulations. One measure requires that medical facilities where abortions are performed meet standards designed for “ambulatory surgery centers.” Another demands that doctors who perform abortions have admitting privileges at a nearby hospital.

“This is a pivotal moment and a pivotal case” in the decadeslong national debate over the right to abortion, says Melissa Murray, a law professor at the University of California at Berkeley and faculty director of the law school’s Center on Reproductive Rights and Justice.

Texas has defended the requirements on the grounds that they raise medical standards and promote patient safety. The state, along with others, acted partly in response to the case of a Pennsylvania abortion provider who ran a substandard clinic where a mother died in 2009.

The admitting-privileges requirement, meanwhile, “ensures doctors are qualified, promotes continuity of care in the case of complications that require hospitalization, and reduces communication errors and time delays when a patient must be treated at a hospital.”

An initial lawsuit brought by abortion providers challenged the admitting-privileges requirement on its face. A federal district court struck down the requirement, but the New Orleans-based 5th U.S. Circuit Court of Appeals upheld it.

Meanwhile, the implementation of the requirements, after rules were promulgated by state health authorities, forced all but the largest abortion providers in the state to close their doors, their advocates say.

A second lawsuit challenged the ambulatory-surgery-centers standard on its face and the admitting-privileges requirement as applied to abortion providers in El Paso and McAllen.

After a short trial, a federal district court struck down both provisions as an “undue burden” on women’s right to abortion under Planned Parenthood of Southeastern Pennsylvania v. Casey, the 1992 decision that reaffirmed the court’s central holding on abortion rights in 1973’s Roe v. Wade.

The 5th Circuit largely reversed the district court. It ruled on the merits of the facial challenge to the requirement that facilities meet standards designed for ambulatory surgery centers, finding that an insufficiently large proportion of Texas women would have to travel long distances to obtain abortions. The court accepted the as-applied challenge for the McAllen clinic but rejected it for the El Paso facility, noting that women in that community could readily travel over the border to New Mexico to obtain an abortion.

The challengers tell the Supreme Court that the Texas requirements would close more than 75 percent of Texas abortion facilities and deter new ones from opening.

“The Texas requirements will not enhance abortion safety,” says the merits brief on behalf of the clinics. “Those requirements will instead make it harder for women to end a pregnancy safely by reducing their access to legal abortion.”

Murray, the Berkeley law professor, joined one of scores of amicus briefs on the abortion providers’ side. “The idea that a woman would have to travel more than 150 miles,” she says, “or go out of state to exercise a fundamental right is like being a refugee.”

“When this bill passed, some Texas legislators tweeted a message to the effect that ‘abortion is now over in Texas,’ ” she says. “It is not clear that this is all about women’s health.”

Mailee R. Smith, staff counsel for Americans United for Life, a D.C. legal organization that opposes abortion, says the case is about more than the Texas provisions on facility standards and admitting privileges.

“What is really at stake is whether the Supreme Court meant what it said as far back as Roe when it said the states may regulate abortion to protect maternal health,” says Smith, who filed an amicus brief on Texas’ side from legislators in several other states.

The Zubik case, to be argued March 23, stems from regulations under the Affordable Care Act, which generally requires most large employers to offer group health plans with “minimum essential coverage,” which has been interpreted by the Department of Health and Human Services to include coverage of contraception.

Churches, associations of churches and the religious activities of religious orders are exempt from the contraceptive mandate, but the HHS declined to exempt many other religious employers, such as schools, colleges and nursing facilities.

The government originally sought to have the religious organizations certify their religious objections using a Department of Labor form. But the Supreme Court intervened in an early stage in a case involving Wheaton College, a religious institution in Wheaton, Illinois, (and one of the parties now before the court) to mandate that the objecting employers need only inform the federal government in writing of their objections, not fill out the form.

The accommodation did little to quell the objections of a range of religious organizations to the contraceptive mandate. They sued all over the country under the Religious Freedom Restoration Act of 1993, which says that “government shall not substantially burden a person’s exercise of religion even if the burden results from a rule of general applicability.”

Six out of seven federal appeals courts that considered the question sided with the government.

The religious employers contend that the Supreme Court, in its 2014 decision in Burwell v. Hobby Lobby Stores Inc., already concluded that the fines for noncompliance threatened under the ACA imposed a burden on religious exercise of family-owned or closely held corporations.

They argue that the logic of the Hobby Lobby decision should also apply to them. And they contend the fight is not simply over the filing of a piece of paper declaring their objection.

“The government is hijacking our health plans, which we created and that we maintain for the benefit of our people,” says Gregory S. Baylor, senior counsel with the Alliance Defending Freedom, a legal group representing several religious colleges in the case. “The government is then seeking to use those plans to deliver drugs that we find morally objectionable.”

The Obama administration argues that the accommodations it has offered are the least-restrictive means of achieving its compelling interest that women are able to get contraceptive coverage and they are consistent with the Religious Freedom Restoration Act.

“Although [the employers] sincerely believe that invoking the accommodation would make them complicit in objectionable conduct by others, RFRA does not permit them to collapse the legal distinction between requirements that apply to them and the government’s arrangements with third parties,” U.S. Solicitor General Donald B. Verrilli told the court in a brief.

Greenberger of the National Women’s Law Center notes that the Hobby Lobby decision spoke approvingly of the government’s accommodation. “We have a history in this country of trying to accommodate religious objectors in all kinds of ways, including for the draft,” she says. “But someone has to notify the government that they are objecting. It’s very hard for [the religious employers] to say that this is burdensome.”

Ilya Shapiro, a senior fellow at the libertarian Cato Institute who co-authored an amicus brief on the side of the religious employers, says the federal government’s entire regulatory approach to the contraceptive mandate was the result of “haphazard and unauthorized guesswork by anonymous bureaucrats.”

This article originally appeared in the March 2016 issue of the ABA Journal with this headline: “Reproductive Rights Revisited: Court to consider abortion regulations and the contraception-coverage mandate.”

When applying the “undue-burden standard” of Planned Parenthood v. Casey, does a court err by refusing to consider whether and to what extent laws that restrict abortion for the purpose of promoting health actually serve the government’s interest in promoting health? And did the 5th Circuit err in concluding that this standard permits Texas to enforce, in nearly all circumstances, laws that would cause a significant reduction in the availability of abortion services while failing to advance the state’s interest in promoting health—or any other valid interest?

Does the Department of Health and Human Services’ contraceptive-coverage mandate and its “accommodation” violate the Religious Freedom Restoration Act by forcing religious nonprofits to act in violation of their sincerely held religious beliefs, when the government has not proven that this compulsion is the least-restrictive means of advancing any compelling interest?