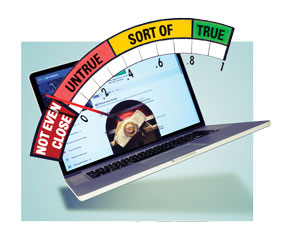 Thomas Robins was an unemployed resident of Vienna, Virginia, in 2010 when he sued Web directory Spokeo Inc. for publishing an Internet profile of him that he says was full of inaccurate information.

Now Robins and Spokeo are in the U.S. Supreme Court with a case that implicates the constitutional separation of powers, privacy in the digital age and class actions under a host of federal statutes. And if that weren’t enough, the case has self-described “law geeks” excited because the legal question before the justices is all about the intricacies of standing.

“It’s an important case whether you are a law geek or not,” says Michael E. Solimine, a law professor at the University of Cincinnati, who signed an amicus brief filed on behalf of the Virginia plaintiff.

Robins’ profile on Spokeo, which describes itself as a “people search engine,” said that he had a graduate degree, was employed in a professional or technical field, had very strong economic health and a wealth level in the “top 10 percent.” The profile also said he was in his 50s and married with children.

None of that was true, Robins maintains. Though he acknowledges that his profile contained some accurate information, he has no graduate degree, was unemployed, is not married, has no children and is not in his 50s. (Robins’ suit, and his subsequent legal filings, reveal very little else about him.)

Robins filed a putative class action alleging that Spokeo was a “consumer reporting agency” under the federal Fair Credit Reporting Act. His suit alleges that the website markets its reports to human resources professionals, law enforcement and people who conduct background checks.

The suit claimed that Spokeo willfully violated the 1970 fair-credit reporting law. The statute requires a consumer reporting agency to follow reasonable procedures to “assure maximum possible accuracy” in its reports. The law provides for actual damages sustained and “statutory damages” of not less than $100 and not more than $1,000, plus possible punitive damages.

Spokeo contends that it is not covered by the Fair Credit Reporting Act and warns that its profiles are not to be used for purposes covered by the act, such as establishing a consumer’s eligibility for credit or employment. But it sought to clip Robins’ suit at the start by arguing he did not have standing because he had not alleged an “injury in fact.” In other words, he was not harmed by any of the misinformation that had appeared, Spokeo maintains.

“The Supreme Court has said many times that you have to have an injury in fact to get into federal court,” says Andrew J. Pincus, a Mayer Brown partner in Washington, D.C., who is representing Spokeo. “This case is about whether you have to have a real-world injury. It doesn’t have to be economic, but it has to be something palpable that happened to you.”

A federal district court, after initially denying Spokeo’s motion to dismiss, reversed itself and held that a mere violation of the Fair Credit Reporting Act does not confer Article III standing where no harm was involved.

The 9th U.S. Circuit Court of Appeals at San Francisco reversed, reviving Robins’ suit. The appeals court framed the issue as one of whether Robins has standing to sue a website operator under the FCRA for publishing inaccurate information about him. The court held that Robins’ suit satisfied Article III because “Congress’ creation of a private cause of action to enforce a statutory provision implies that Congress intended the enforceable provision to create a statutory right,” and that “the violation of a statutory right is usually a sufficient injury in fact to confer standing.”

The company appealed, and the justices are scheduled to hear arguments Nov. 2 in Spokeo Inc. v. Robins.

Pincus’ brief for Spokeo points to a law review article by one scholar who might be described as a geek on the topic of legal standing—Chief Justice John G. Roberts Jr.

In an article in the Duke Law Journal in 1993, when he was a lawyer in private practice, Roberts wrote that it would be “remarkable” and “unfortunate” to hold “that Congress may override the injury limitation of Article III” when “there is no indication that Congress embarked on such an ambitious undertaking.” (He was discussing a then-recent Supreme Court decision interpreting standing under the Endangered Species Act.)

Robins’ brief cites its own legal geek on standing, Justice Antonin Scalia, who was a judge of the U.S. Court of Appeals for the District of Columbia Circuit in 1983 when he delivered a lecture supportive of standing for a litigant asserting a violation of any legal right.

“Standing’s existence in a given case is largely within the control of Congress,” Scalia said in the lecture, which was reprinted in the Suffolk University Law Review.

Solimine of the University of Cincinnati, who joined an amicus brief by several law professors in support of Robins, says that under the Fair Credit Reporting Act, Congress has validly created judicially enforceable rights.

“Congress can, within some bounds, pass a statute like this that empowers plaintiffs to bring suit to serve a deterrence function and as a compensation function,” he says.

TEEING UP THE ISSUE AGAIN

The Supreme Court, in its 2011-12 term, took up the issue of whether standing required injury in fact in First American Financial Corp. v. Edwards, a case stemming from real estate settlements. But on the final day of the term, the justices dismissed the appeal as “improvidently granted” without further explanation.

Robins’ case tees up the issue again, with a backdrop of Internet information and privacy issues that raise its profile considerably.

“What makes this area of the law interesting right now is that we are trying to figure it out as a society,” says Fred H. Cate, a law professor at Indiana University in Bloomington who has studied data privacy issues but is not involved in the case.

“Pretty much everybody in the country has had data about them exposed inappropriately or inaccurately presented,” he says. “We typically don’t allow all these people to bring lawsuits. We say something has to happen to you first. I think there is a huge risk of a Pandora’s box if we open these gates and say you can sue even if you don’t show harm.”

Spokeo has drawn support from a range of business interests and other groups. The Consumer Data Industry Association, for example, worries about the outcome because its members’ consumer-reporting procedures are repeated as many as millions of times per day.

Because the FCRA imposes obligations both on those who provide information that goes into credit reports and on the users of such reports, in-cluding creditors, employers and landlords, the Consumer Data Industry Association contends “the risk of no-injury class action lawsuits, such as Robins’ putative class action, could threaten nearly every aspect of the U.S. economy.”

Robins has remained out of the spotlight, and his lawyers declined to comment. But they argue in their main brief that the actual or threatened injury required by Article III may come solely from statutes that create legal rights.

“Robins alleges that Spokeo willfully violated the personal rights that he holds under the FCRA,” his merits brief says. “To redress that violation, he brought a private right of action that Congress created and seeks the statutory-damages remedy Congress provided. Article III demands no more.”

Privacy groups, environmental groups, President Barack Obama’s administration and others have lined up on Robins’ side.

“The court’s potential ruling in this case could affect a broad array of federal statutes that create privacy rights,” says Marc Rotenberg, executive director of the Electronic Privacy Information Center, a D.C. group that argues that plaintiffs have standing when a company misuses personal information in violation of federal law.

“If you pick your head up and look around, you can see that the United States is in the midst of great risks to the privacy of information,” he says. “This is not the time to be creating new obstacles to enforcing privacy rights.”

This article originally appeared in the November 2015 issue of the ABA Journal with this headline: “Misinformation Age: Court weighs the right to sue an Internet data site.”