MY PATH TO LAW 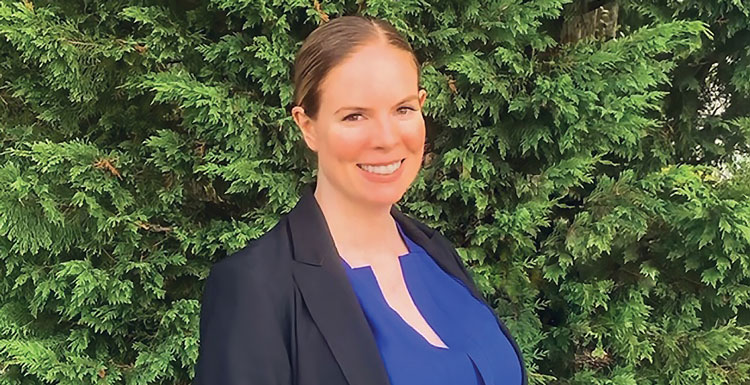 Emily Cox: “Law school is difficult no matter who you are, but it can be particularly rough when you have a disability.” Photo courtesy of Emily Cox.

Being placed in my school’s special education program when I was 6 was the first and probably most important step on my path to the law.

I was born with congenital nystagmus, a condition that causes my eyes to rapidly and continuously move side-to-side. As a toddler, the nystagmus was so severe that doctors told my parents I was legally blind and would never be able to read. Glasses helped, but the doctors couldn’t do anything about my eye movements. In kindergarten, I quickly fell behind. The first time I truly understood that I was different from the other kids was when they taught us to tie our shoes, and I repeatedly failed the follow-up test. No matter how often I practiced, the laces in my shoes seemed to swarm together in a jumble. I had to wear my Velcro shoes long after all my classmates graduated to the “big kid” shoes (my dad started wearing Velcro shoes in solidarity with me—and ended up liking them so much that he sometimes still wears them!).

By first grade, my peers were far ahead of me in more than just shoe-tying skills. The school assigned a special education teacher named Gretchen to work with me, and Gretchen is the one who finally set me on a better path. Twice a week, I left class to work with Gretchen on my reading and writing using large-print books and materials, as well as computer programs for the visually impaired. Although being taken out of class for these sessions was embarrassing, I eventually looked forward to them. Gretchen never made me feel stupid or different, and finally having the tools I needed was transformational. I saw Gretchen for most of elementary school, until I caught up with my classmates and could use the tools on my own.

By sixth grade, I tested into my school’s gifted program. By my 16th birthday, I had taken my GED and was accepted into college full time.

Shortly after earning a bachelor’s in philosophy, I enlisted in the Washington Army National Guard. Like many others, after Sept. 11, I wanted to do my part to serve and protect my country. I chose to join the Army National Guard because it gave me the opportunity to be a part of missions in my home state as well as the national mission.

I’ve never been an “outdoorsy” person and had never so much as held a gun, so the nine weeks I spent in basic training at Fort Leonard Wood in Missouri was by far the most difficult thing I’d ever done. But I made it through, then completed my advanced individual training as an intelligence analyst at Fort Huachuca in Arizona. Soon I was providing intelligence for our Black Hawk and Chinook helicopter units as part of the 66th Theater Aviation Command at Joint Base Lewis-McChord. I traveled to South Korea and Germany during my time with the unit, and with their encouragement I returned to training and was commissioned as an intelligence officer.

I enjoyed the work, but life intervened to change my path. After about five years in the military, I started having some health problems that eventually manifested into a seizure disorder. It became obvious I would be medically separated, and I faced a choice of what to do next. The law seemed like a very natural career progression to me—a new way to continue my mission to serve and protect the community.

Law school is difficult no matter who you are, but it can be particularly rough when you have a disability. During law school, I struggled with countless seizures, numerous medication changes, and having my license to drive rescinded. But I was fortunate to be in a school that cared about my disability with an administration that made sure I had the resources I needed to succeed. Because of that, I not only graduated on time, but I also worked with other students to create a new veterans club for the school and participated in a Rule 9 internship with a prosecutor’s office that led to a full-time job offer.

I delayed taking the bar six months because of a medication change, but the prosecutor’s office held my position for me, and I was finally licensed May 1, 2014. I worked in a fast-paced office, quickly gaining experience in trials and criminal motion practice. Less than a year after passing the bar, I was asked to speak at a state conference for prosecutors because of work I had done on cases involving expert witnesses. This led to invitations to speak at several other state trainings, and I began assisting prosecutors both in Washington and nationally with trial preparation for cases involving specific expert witnesses.

Being a prosecutor with a disability has certainly been challenging, and I’ve had public seizures in the courthouse more than once. But the rewards of working in a job where the entire goal is to “do justice” is worth the struggle. I’m also fortunate to have found an employer as supportive as the Pierce County Prosecuting Attorney’s Office. My colleagues accept my seizures as a part of who I am and are happy to assist with any accommodations I need.

Having a disability that significantly affects your life will always be a challenge, but I don’t think it has to be a barrier. I’m grateful that I’ve been given the tools I needed to succeed, from my first meeting with Gretchen to my position with my current office.