Taking Their Pains to the Clinic 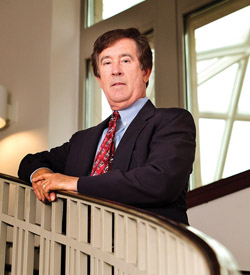 After the New Jersey development group Sussex Commons obtained permits to build a strip mall, a local residents group challenged the permits with the help of students at a Rutgers University law school clinic.

Upset that a public law school got involved in an application for development, and concerned that the law clinic had an anti-development bias, Sussex Commons filed an open-records request with the clinic, seeking internal documents regarding its involvement in the case.

“Using a state records law to pry into confidential communications between lawyer and client is a very bold attempt to chill” future cases, says Robert Kuehn, who teaches at Washington University Law School in St. Louis and is current president of the Clinical Legal Education Association.

But Kevin Kelly, the lawyer who represents the New Jersey developer, says he was shocked that “an ordinary, routine open-public-records-act request like this” received national attention. “It obviously struck a nerve.” Ultimately, the court said the public records law did not allow access to case information.

The Rutgers case is one of several recent examples of law school clinics caught in a web of peeved alums, local businesses and angry legislators. The clinics are facing pressure to abandon clients, as well as threats to ban hiring of graduates and attempts to bankrupt their universities.

Maryland legislators, for example, considered a law to slash funds to the University of Maryland if the school’s environmental law clinic didn’t provide detailed information about its expenses and cases. The proposed legislation, later amended to drop the funding conditions, came after the Perdue poultry company was sued by clinic students for environmental violations in the Chesapeake Bay.

Similarly, in Michigan, a Detroit district attorney listed as prosecution witnesses University of Michigan law students representing the defendant through an innocence law clinic. Had the DA not subsequently dropped the case, the witness list would have required students to testify against their own client.

GOING FOR THE KNEES

According to Kuehn, the “granddaddy” of such controversies centered on Louisiana, where state Sen. Robert Adley introduced Senate bill 549, which would have prohibited law clinics from filing suits or seeking money damages against government agencies. That proposed legislation, which also put legislative commerce committees in charge of regulating court appearances by clinics, came in response to a suit brought by a Tulane University law clinic against environmental regulators regarding air quality standards. A case strategy document was leaked detailing a Louisiana chemical trade organization’s plan to “kneecap” Tulane by not hiring its graduates.

“Law clinics are to represent low-income or deprived citizens that cannot fend for themselves. Tulane has filed suits for the Sierra Club and other well-funded organizations that are capable of filing and paying for lawsuits,” Adley says. “If a school receives money from government, the school should not file suits against taxpayers or regulators that are charged with regulating the public.”

But efforts to stop law students from litigating a particular group of cases counters all that students are being taught, insists Jeffrey Brand, dean of the University of San Francisco School of Law. “The benefit of clinical education is that it provides students an opportunity to ferret out injustice within the context of the ethical rules that the bar properly demands. To preclude an entire category of cases sends the wrong message,” he says.

In a statement opposing Adley’s Louisiana bill, immediate-past ABA President Carolyn B. Lamm urged the legislature not to “thwart those students working to solve people’s problems.” Adley’s legislation was defeated in committee after a public outcry.

Clinical legal education emerged in the 1960s as a way to prepare law students not just for legal analysis but for other aspects of lawyering. Handling their own cases with supervision from professors, students learn pretrial and trial procedures, negotiation, transactions and the nuances of the attorney-client relationship.

Clinics offer “an unmatched method of teaching professional skills and values to the next generation of lawyers,” Kuehn explains. “The consensus is that the best way to learn to practice law is not from a book or lecture but by putting students in the role of lawyer in a controlled situation.”

Leaders of the Association of American Law Schools have stated that to attract good students, law schools need to be competitive by offering vibrant clinical opportunities.

Specifically, according to a 2007-2008 report by the Center for the Study of Applied Legal Education, law clinic students annually provide 2.4 million hours of free legal services—1.8 million hours on civil matters and 600,000 hours on criminal matters, representing nearly 90,000 clients in civil matters and more than 38,000 clients in criminal cases. In the criminal cases, the state would otherwise pay an attorney to represent the defendant. Related data suggests that law students who work at clinics continue their commitment to pro bono work after graduation.

Harvard’s Legal Aid Bureau, for example, embarked on anti-foreclosure efforts, including door-to-door community outreach to educate tenants and homeowners about their rights. Similarly, the University of Maine School of Law’s Juvenile Justice Clinic litigated a complex competency case, which required the federal court to determine the appropriate legal standard to apply to juvenile competency proceedings. And the Constitutional Litigation Clinic at Rutgers-Newark challenged the state’s computerized voting machines, resulting in the formation of a new panel of computer security experts to evaluate New Jersey’s existing voting system.

Yet clinical education raises questions about who controls the casework, especially at publicly funded schools. This hands-on teaching affects not just the law students but also clients and opposing parties, triggering debates about professional responsibility and academic freedom.

Kelly, the attorney in the Rutgers case, insists his client has “no interest in harming law clinics or anything they do. They do good work. They just shouldn’t operate in secret with public funds.”

Law clinics stand in the same position as any other arm, department or section of a public university in accounting for how they spend their money, he says. “If the university spends $2 million on a football coach, they must report it so that people can debate whether to have a $2 million football coach. We see it the same.” The public records law protects all attorney-client privileged documents, Kelly adds. “We can’t get the clinic’s files or memos—nor did I ever ask for that.”

But proponents of lawyering in the academy argue that to be effective, clinics must be treated less as a student program and more as a law office, with the full protections of the attorney-client relationship and the accompanying obligations of ethical rules. For example, model rules of professional responsibility as well as ABA ethics opinions provide that lawyers should accept their fair share of unpopular clients or matters and, at the same time, resist outside pressure or influence on their lawyering.

“In the cases in Louisiana, Michigan, New Jersey and Maryland, opponents knew that if they could get the clinics off the cases, those cases would never occur. It’s an effort to silence,” Kuehn says. “People should not be denied representation because a case is controversial. Lawyers have a professional obligation to make sure people are heard.”

But Louisiana’s Adley says his legislation was aimed only at environmental law clinics. There was “little impact on training law students would get,” he says, “and there would be negligible impact on needy individuals. Using the needy as an excuse to ‘extort’ money from individuals or companies that follow the law established by elected representatives of the public should be forbidden.”

Interestingly, defending clinical education in and of itself may also be teaching law students about lawyering.

“Clinical programs are designed to help people become good lawyers,” says Susan Westerberg Prager, executive director of the AALS and former dean of UCLA School of Law. “The attempts to preclude clinical work is one example of what practicing lawyers will see in their careers.”

This year’s notable attacks on clinics “made me feel that we should probably be building a database of in formation for our member schools about what has occur red, what people have said,” Prager adds. A faculty volunteer is adding a collection of pleadings and legislative history to the AALS website.

As these disputes increase, the Clinical Legal Education Association similarly finds itself advocating on behalf of law clinics, drafting letters and filing amicus briefs. “We must continuously step in to assist and push very hard to educate clinics about these sorts of attacks,” Kuehn says. “I don’t know if we can ever prevent them, but we can strenuously step in to show they’re outrageous.”