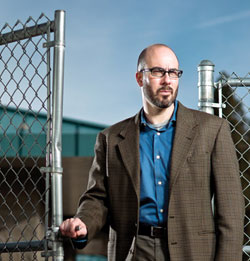 Officials in Deschutes County, Ore., initially believed they had caught a break from the 9th U.S. Circuit Court of Appeals.

Sure, the court held in 2009 that a deputy sheriff and a state child-welfare caseworker violated a 9-year-old girl’s Fourth Amendment rights when they went to her school, pulled her out of class and questioned her about whether her father had sexually molested her. They admit they lacked probable cause, a warrant or parental permission.

But the San Francisco-based 9th Circuit hadn’t faced the issue before in a school setting, so it also held that the deputy and caseworker were entitled to immunity for their actions because the law wasn’t clearly established at the time.

Indeed, with the prospect of damages wiped out, county lawyer Christopher D. Bell says officials almost blew the case off. Instead, Bell is headed for the U.S. Supreme Court to argue it, even though the county effectively won by way of the immunity holding.

Officials realized the immunity argument won’t work for the next investigator caught up in similar circumstances. In also deciding the Fourth Amendment question, the 9th Circuit established the law from that point on, meaning no one else gets immunity.

Calls from cops all over the country started coming in to Bell’s office in Bend, Ore. Their message was urgent: “You absolutely have to appeal this because this will wreak havoc with our ability to investigate child abuse cases, especially child sexual abuse within families,” Bell recalls. Arguments for Camreta v. Greene are scheduled for March 1.

It’s one of two cases this term that deal with police questioning kids at school. The other, J.D.B. v. North Carolina, concerns the Fifth Amendment Miranda rights of a 13-year-old burglary suspect who wasn’t told he could remain silent before he confessed. Arguments are slated for March 23.

In Camreta, Fourth Amendment seizure rights are at issue because the girl was questioned as a witness and possible victim.

The cases also offer a look at the practical difficulties authorities encounter when they investigate child abuse. Investigators throughout the nation routinely question abused children at school without warrants or parental permission. They like to go to schools because the child may be more comfortable there, and parents won’t be in the way.

“These crimes happen behind closed doors,” Bell says. “To get probable cause to obtain a warrant can be difficult, if not impossible.”

The Supreme Court in Camreta has agreed to hear both the immunity and Fourth Amendment issues. The controversy boils down to a balancing test that requires police to weigh the state’s interest in investigating child abuse against the privacy rights of a 9-year-old girl, as well as her parents’ right to raise her free from state interference and to protect her from the stigma of such probes.

It’s a real minefield where plenty can go wrong. Statistics cited by the 9th Circuit showed state and local authorities investigated 3.6 million cases in 2006, but that only about a quarter of the children were in fact abuse victims.

The seeds to Camreta grew out of Nimrod Greene’s February 2003 arrest on charges of abusing a 7-year-old boy. The boy’s mother also told investigators that Greene’s wife, Sarah, had complained about her husband making their daughters, S.G. and K.G., sleep in his bed when he was drunk and about “the way he acts when they are sitting on his lap.”

After the arrest, Deputy James Alford and child welfare worker Bob Camreta of the Oregon Department of Human Services went to S.G.’s school. The investigators reported the girl told them Greene had touched her “private parts” outside her clothing on several occasions. But S.G. later said she “remembered all my dad’s touches with fondness.”

Sarah Greene, as the plaintiff representing her daughters in the section 1983 action, maintained that S.G. said her father sexually touched her only because Camreta’s questions scared and confused her. Greene has maintained his innocence from the beginning.

A month later, Greene was indicted on six state counts of felony sexual abuse on S.G. and the boy, who is not related. After Greene’s release on bail, Camreta went to juvenile court, had the girls placed in foster care, and arranged for a medical examination to determine whether either girl had been sexually abused. He told the court Sarah couldn’t ensure that her husband would stay away from the girls while the case was resolved, which Sarah denied. And though Sarah said she wanted to attend the medical exam, Camreta told the court she refused to sign a release for the evaluation. The subsequent exams were inconclusive.

Regardless of the outcome of the Fourth Amendment and immunity issues, the lower courts still have to decide the factual disputes over foster care and the exams.

“There’s no immunity here,” says Greene’s lawyer, Mikel R. Miller of Bend. “There are cases that say you can’t lie to courts.”

Greene ultimately took a plea deal for probation in the criminal case involving the boy, and the state dropped the charges concerning his daughter. He remains an adjudicated sex offender who must register as such, but he was allowed to move back home with his wife and daughters after undergoing three years of treatment.

Prosecutors’ problems didn’t end with Greene’s plea. Though the Fourth Amendment only bans unreasonable searches and seizures, not warrantless searches, authorities still need probable cause to obtain a warrant.

Because prosecutors concede they can’t carry that burden, they have to convince the court that it was reasonable to take S.G. out of class and question her. But the case doesn’t fit any of the exceptions to the warrant requirement that the court has carved out over the years involving “special needs,” such as drug testing and roadside checkpoints, that render warrants impracticable.

But when the police come calling, prosecutors say, the courts need to lower the probable cause standard—belief that a crime most likely has occurred—to a reasonable suspicion that a crime may have occurred. They say it’s especially suited for school situations when authorities want to talk to victims and witnesses, not snatch criminal suspects.

On the other coast, 13-year-old J.D.B. argues that his age should figure into his Miranda rights. The case offers the rather straightforward issue of whether J.D.B. believed he was in custody. If he was, then a detective had to read him his rights before questioning him in September 2005 about two burglaries in Chapel Hill, N.C. Minutes earlier, a uniformed, armed school resource officer had removed J.D.B. from class in front of other students. The interrogation occurred behind closed doors in an unlocked conference room. Though J.D.B. initially denied involvement in the burglaries, he confessed after an assistant principal attending the session urged him to “do the right thing.”

Only then did the detective tell the boy he did not have to speak to him and was free to leave. According to the trial court’s recap of events, the detective never advised J.D.B. that whatever he said could be used against him, or that he had the right to a lawyer and, as a juvenile, to have his parents present.

A divided North Carolina Supreme Court rejected J.D.B.’s appeal and toed the traditional line that custody determinations should be judged under an objective standard as to whether a reasonable person in the same predicament would believe he was in custody. The North Carolina court has in the past deemed individual characteristics, such as age, irrelevant.

So J.D.B. wants the Supreme Court to change that, and he could have room for optimism, as kids have come out on the winning end in recent decisions involving juveniles and the death penalty and life sentences without parole.

“I think it’s a recognition that children are not at the same developmental age as adults and should not be held to the consequences of bad decision-making,” says North Carolina Assistant Appellate Defender Barbara S. Blackman.