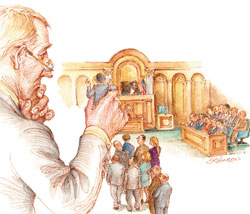 Andy Lundquist came into the Brief Bag looking for Angus. “I’m in serious need of help,” he said. “What’s the problem?” said Angus. “My first real trial is coming up next week,” said Andy. “I thought I had a handle on everything until I started working on the order in which I’m going to call people to the stand. I know witness order is supposed to be important, but I don’t have any idea where to start.”

“Piece of cake,” said Myra Hebert. “No matter which side you’re on, start strong and end strong. Put your weak witnesses in the middle. Am I right, or what?”

“I’ve heard those ideas before,” said Andy. “But I still don’t know what to do. I mean, it seems like there’s got to be more to it than that.”

“You’re right,” said Angus. “There is more to it than that. Witness order is important. So is the order of issues, as well as the strengths and weaknesses of both sides of the case. There are so many interrelated factors that bear on the order in which you try a case that there is almost never one perfect way to do it.

“But there are principles that will take a lot of the difficulty out of organizing your trial and settling on the order of your witnesses.”

Angus was just getting started. Here are my notes from what he said:

You are the most important witness on your side of the case, and your credibility is crucial. While you don’t actually testify, you get to talk directly to the judge and jury when it counts the most: right at the start. What’s more, the other side doesn’t get to hammer you on cross-examination.

So think of yourself as a very special witness. And factor your opening statement into the equation of how you order your proof.

Why? Because for purposes of persuasion, your opening statement is part of your proof.

The guiding principle is to make sense out of the facts —tell a coherent story that will make the judge and jury want to take your side and see the evidence your way.

The opening statement doesn’t have to—and should almost never—track the order in which you’re going to prove your case. The opening gives you a chance to tell the winning story and to give the jury the right point of view. Just as important, the statement lets you focus on what needs to be emphasized at the start of your case.

You can see why you’ll gut the opening of all its power if you simply use it as a preview of the rest of your case. It’s like throwing your first witness away.

A simple commercial case will show you how it works. Say you represent Electro-Toys, a company that has created the next generation of three-dimensional video games—a new development in a fast-moving and highly competitive field.

When Fast-n-Tite failed to deliver, Electro-Toys had to shut down its production line at the peak of its manufacturing season. In addition to having a disastrous year because of Christmas sales that never happened, the company lost 80 percent of its market share, and now it is a year behind in developing a technology it created.

What are the big pictures: contract, breach and loss? No, that’s the way a law professor thinks—in legal issues. The trial lawyer sees stories—groups of facts. One picture is what the lack of fasteners meant to Electro-Toys. You already have an idea of what’s in it.

Making the bargain is another picture. Fast-n-Tite knew its fastener was essential to Electro-Toys. Fast-n-Tite even helped develop the assembly line that fed the parts to the workers and automatically popped their fasteners in place.

Then there’s the picture of when delivery slowed down and finally stopped. Electro-Toys laid off 60 workers in September, when it usually was hiring extras. By October, the entire production line was down. A series of calls and faxes and overnight letters to Fast-n-Tite was met by evasion, broken promises and missed delivery deadlines.

Motive is another group of facts—one that too many lawyers neglect. A breach of contract may be a matter of legal theory, but it’s one thing if Fast-n-Tite’s machinery broke down so it couldn’t keep its commitments, and quite another if it started delivering fasteners to Electro- Toys’ competitors instead. There is nothing like treachery to help prove big liability, and nothing like big liability to help justify big damages.

Yet another image is what Electro-Toys did to avoid damages. Months spent in trying to find other sources of supplies, frantically trying to change the design of the controllers and efforts to retool the assembly line paint an entirely different picture than that of an organization that simply gave up and sued its supplier.

Every major group of facts tends to have its own witness list. Often you will have a choice of who you want to create each snapshot that is part of the larger picture.

Who do you pick? You already have a sense of who is a good witness and who is not, but there are some specific factors to consider:

Who can make the story come alive? The judge and jury should feel that they are eyewitnesses to your facts.

Who sees the facts from a point of view the jury will identify with? The right point of view is important for identifying with your client. A juror who doesn’t care if management loses money may listen closely to a foreman talk about forced layoffs on the assembly line.

Start strong and end strong with every group. Plan the presentation of documents and demonstrative evidence as part of your witness order.

If your second- or third-best witness in a group is the one who explains a dramatic photograph or explosive document, think about putting that witness first.

Free yourself from the compulsion of chronology. While a timeline can be an important picture of motive, or cause and effect, rigid chronology often gets in the way of clarity and simplicity.

Instead, think about your case from every possible starting point. Where does talking about damages make more sense: at the beginning or the end? Where should motive come in: before or after the conduct it induced? There is no one right answer to those questions. But once more, there are some factors to take into account.

One factor is impact. Often you want to put your big gest bomb up front, where it will have the most emotional effect—but not always.

Another consideration is that whenever jurors come to a conclusion on their own, they are more likely to believe it is true. One of your jobs is to arrange the facts so jurors reach the right conclusion “on their own.”

A third factor comes from the strengths of the other side’s case. Especially if you’re the plaintiff, you probably don’t want to start or end your case with your opponent’s best cross-examination—even if it means moving one of your strongest witnesses into the middle.

Now go back to Electro-Toys and its case against Fast-n-Tite. Let’s say you decide the best place to start your case is with the picture of making the bargain, followed by Fast-n-Tite’s money motive for selling its scarce supply of fasteners to Electro-Toys’ biggest competitor.

But you know Fast-n-Tite can create a huge smoke screen by cross-examining your witnesses with hundreds of letters and memoranda, quibbling with the language of all your documents, as well as introducing several stacks of its own.

In other words, starting with the picture of the bargain is leading with your chin.

So you decide to concentrate your opening statement on the story of the bargain and Fast-n-Tite’s reasons for stopping delivery of its fasteners. It’s the first “testimony” the jury hears, and it makes an impression, especially since the defendant’s cross-exam is now going to have to wait for the middle of your case.

Then imagine the impact when your first witness is the foreman who tells about having to lay off all those people on the assembly line. What is Fast-n-Tite going to do on cross: Argue that everybody just decided to quit?