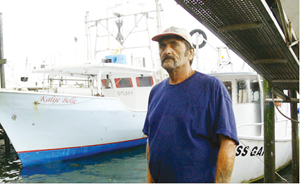 When Congress passed the Sarbanes-Oxley Act in 2002, in the wake of the Enron scandal, a key provision was aimed at making a federal crime the type of conduct committed by the energy company's auditors: rampant destruction of documents, computer drives and email that detailed Enron's fraud on its investors.

Few would have predicted that the corporate-responsibility law would be used to prosecute a commercial fisherman in Florida over the destruction of six dozen undersized red grouper.

But the Gulf Coast fisherman, John L. Yates, was convicted in 2011 of violating the "anti-shredding provision" of Sarbanes-Oxley, which makes it a crime to knowingly destroy, mutilate, conceal, falsify or make a false entry in "any record, document or tangible object with the intent to impede, obstruct or influence" a federal investigation.

On Nov. 5, the U.S. Supreme Court will review Yates' case. The great weight of legal commentary is on his side, with many law professors, business interests and even one of the Sarbanes-Oxley sponsors backing the view that Yates was the victim of overzealous prosecutors, and that the anti-shredding provision was meant to close a loophole on criminal destruction of business records, not fish.

"This is an uncommonly silly prosecution," says Paul J. Larkin Jr., a former federal lawyer (who served in the solicitor general's office and as an environmental protection agent) and now a senior legal research fellow at the Heritage Foundation.

"Nobody stores information in a fish," he says. "It seems to me when the law talks about tangible objects, it is talking about objects such as hard drives, cellphones, thumb drives and CDs—not fish."

But U.S. Solicitor General Donald B. Verrilli Jr. argues that the anti-shredding provision of Sarbanes-Oxley covers all types of physical evidence.

Verrilli argues in a brief that under Yates' arguments, the provision would prohibit "a murderer from destroying his victim's diary, but not the murder weapon."

A MATTER OF SIZE

On Aug. 23, 2007, Yates was captain of the Miss Katie fishing boat when it was six days into a commercial harvest of red grouper in Gulf Coast waters off Tampa.

A Florida fish and wildlife enforcement boat approached the Miss Katie in federal waters to conduct a routine inspection, court papers say. John W. Jones, the state officer in charge, had been deputized to enforce federal size limits for fish. At that time, federal law required harvested grouper to be at least 20 inches in length. Smaller ones were to be released back into the water.

The agent saw that at least a few of the red grouper in the boat's fish box were undersized, and he began measuring the bulk of the boat's catch. There is some disagreement about whether Jones used the right measuring technique—open-mouthed versus closed-mouth, pinched or unpinched tail.

The agent determined that 72 of the grouper were undersized, mostly in the range of 19 to 19½ inches. He wrote out a civil violation, and the fish were crated and put in the Miss Katie's fish box. The agent ordered Yates to return to the dock, where the grouper would be seized and destroyed.

Yates faced potential fines and a suspension of his fishing license over the civil infraction. After the boat returned to the dock at Cortez, Florida, Jones again measured the fish. This time, four days later, he found 69 undersized fish, though most were much closer to 20 inches.

"In your training and experience, is it possible that the red grouper could have stretched in the four days between the 23rd and the 27th?" a federal prosecutor later asked Jones in court, to which he replied no.

A crew member told federal agents that after the state officer had left the Miss Katie on Aug. 23, Yates instructed him and another crewmate to throw the undersized grouper overboard. Yates "pretty much said that he wasn't stupid, that if the [fish and wildlife officers] wanted to make sure that the fish were still there, they should have put a mark on their foreheads," the crew member later testified.

In 2010, Yates was indicted on three charges: destroying property to prevent a federal seizure; lying to federal agents; and destroying, concealing, and covering up the undersized fish to impede an investigation, in violation of Sarbanes-Oxley's anti-shredding provision.

The trial judge rejected the defense's arguments that Section 1519 of Sarbanes-Oxley applied only to documents. Yates, who did not take the stand, was convicted of that charge and the property destruction charge, but acquitted of lying to federal agents. He was sentenced to 30 days in jail, which he has served, and three years of supervised release.

His lawyers say Yates, 62, is not available for interviews. In 2012, after his release from jail, the Anna Maria Islander newspaper quoted Yates as saying the appeal was going forward because "I didn't do it."

The 11th U.S. Circuit Court of Appeals at Atlanta upheld the conviction, concluding on the Sarbanes-Oxley charge that "tangible object," as used in that law, "unambiguously applies to fish."

Donna Lee Elm, the federal defender in Tampa and lead counsel for Yates, says, "This is a statute relating to records, including tangible objects related to records. A fish does not contain records. One cannot make a false entry in a fish."

John L. Badalamenti, an assistant defender who will argue Yates' case, says the fisherman has lost his livelihood and is pursuing his appeal "because he does not want this to happen to another fisherman ever again."

OF BODIES AND BACKPACKS

When the Supreme Court granted review of Yates v. United States, legal observers suggested the case will be this term's version of Bond v. United States, a decision this past June in which the justices threw out the prosecution under a federal chemical-weapons statute of a Pennsylvania woman who had vengefully caused her husband's lover to suffer minor chemical burns.

Stephen Smith, a professor at Notre Dame Law School, says prosecutors' expansive use of the anti-shredding provision of Sarbanes-Oxley is "another example of overcriminalization at work."

The statute was aimed at document destruction arising out of the Enron scandal, "but the Department of Justice applies it to broader situations that Congress did not remotely have in mind," says Smith, who joined an amicus brief by 18 criminal law professors on Yates' side.

Former Rep. Michael G. Oxley of Ohio, a Republican who chaired the House Financial Services Committee when the law that bears his name was passed, also filed a brief on Yates' side, which says "the government's reading of Section 1519 to reach destruction of any and all things, including piscine creatures, falls flat."

The federal government, which has no amici on its side, argues that Section 1519 is a "straightforward ban on destroying evidence."

"The provision logically bans the destruction of all—and not merely some—types of evidence," Verrilli argues in his brief.

He says that since 2002, the federal government has used Section 1519 and a companion provision of Sarbanes-Oxley "to prosecute the destruction of a wide array of physical evidence—including human bodies, bloodstains, guns, drugs, cash and automobiles—in order to cover up offenses ranging from terrorism and the unreasonable use of lethal police force to violations of environmental and workplace-safety laws."

Just this year, he points out, Section 1519 was used to convict Azamat Tazhayakov, a friend of Boston Marathon bombing suspect Dzhokhar Tsarnaev, of helping conceal the backpack that contained fireworks, a jar of Vaseline and a thumb drive linked to the bombing.

Appellate specialist Erin E. Murphy of the boutique Washington, D.C., firm Bancroft discussed the case at Georgetown University Law Center in early fall, where she suggested the government's case is not so silly.

"The government has a not-uncompelling narrative here," she says. "This is a provision of Sarbanes-Oxley, but it is a provision that some people had sought for a long time because there really isn't a federal destruction-of-evidence law that applies more broadly.

"If it really was the case that Congress was trying to get at something broader here, it's hard to understand why it would want to get at only documentary evidence and not, say, a murder weapon," says Murphy, who is not involved in the case. "All of that said," she adds, "I don't think it will be lost on the court that this [prosecution] was a pretty unusual use of the statute."

This article originally appeared in the November 2014 issue of the ABA Journal with this headline: "The Sashimi Provision: After a fisherman is convicted of violating Sarbanes-Oxley, the justices will take the measure of his case."