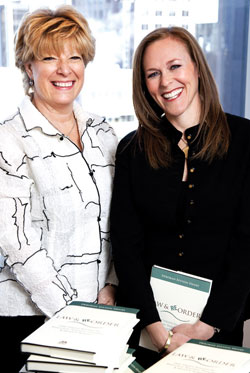 Almost 21 years after leaving the law when her twins, the second and third of six children, were born, Cynthia Wells returned last July and picked up almost where she’d left off.

Though the firm’s name and technology had changed, Wells nestled easily into her former practice group in Sidley Austin’s New York City office. Thanks to a formal re-entry program at a local law school and an enthusiastic greeting from her former colleagues, Wells joined a growing wave of lawyers who were able to resume their careers despite a long break.

In the past several years, the number of legal employers offering programs to stay connected with departing lawyers has grown significantly, says Deborah Epstein Henry, founder of Flex-Time Lawyers, a national consulting firm with chapters in New York and Philadelphia. She is also the author of Law & Reorder: Legal Industry Solutions for Restructure, Retention, Promotion & Work/Life Balance.

In 2007, when Henry began tracking re-entry programs as part of her annual survey on the 50 best law firms for women with Working Mother magazine, only 16 percent of the winning firms had developed such programs. By 2009 that number had grown to 54 percent.

Skadden, Arps, Slate, Meagher & Flom developed one of the first formal programs, Sidebar, in 2006. The initiative allows lawyers to leave the firm temporarily with the expectation that they can return at any time within three years. During the transition period, Sidebar lawyers stay connected through departmental lunches, social events and continuing education programs. While most participants leave to manage child care or elder care responsibilities, the program is open to anyone.

“When it comes to new parents, this provides a great opportunity for them to handle their family life and then come back,” says Kayalyn Marafioti, a New York partner who helped create Sidebar and serves on the firm’s diversity committee. Marafioti says the firm developed the program for a pragmatic reason: Lost talent is bad for business.

“If we [in the legal profession] don’t open our eyes to these kinds of opportunities, then we are going to lose talented, capable lawyers—and we’re in a service and talent business,” she says. “We don’t want to lose high-performing lawyers because they have family obligations.”

While re-entry programs aren’t as hot as they were before the recession, Henry says the economic downturn can be seen as an advantage because returning attorneys are often hoping for flexible schedules. In today’s market, staffing needs ebb and flow, and that’s where re-entry attorneys are a gem: They often seek temporary assignments as a ticket back into the legal market, she says.

“If an employer is uncertain of staffing needs, a re-entry lawyer can expand or contract based on the demands of practice, and then it becomes a no-risk proposition,” Henry says.

To begin her re-entry process, Wells enrolled in a program at Pace Law School in White Plains, N.Y. First she completed a 10-week course designed to bring attorneys back up to speed in both substantive law and the changing legal market. An externship with her former team at Sidley followed. When she finished, she was offered a job as a full-time staff attorney.

“It’s a beautiful thing to be able to rejoin the group you left,” she says. “I’m thrilled to be back in the workforce and particularly to be here with folks I know. And I’m bringing this sense of satisfaction having been able to have raised my family and been there to enjoy them.

“I don’t feel torn at all. I’m doing exactly what I need to be doing right now.”

Becky Beaupre Gillespie is a Chicago-based journalist who writes on work-life balance. Hollee Schwartz Temple directs the legal writing program at West Virginia University. They are co-authors of “Good Enough Is The New Perfect: Finding Happiness and Success in Modern Motherhood.”