(Too) Easy For You To Say 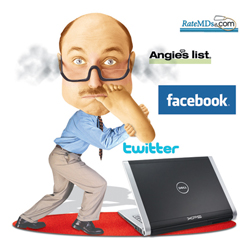 Freedom of speech might be one of our most cherished rights, but spouting off online can sure get a person in some deep doo-doo.

Thanks to Facebook, Twitter, etc., jobs have been lost, marriages busted up and friendships torpedoed—not to mention the multitude of lawsuits filed. For every person who believes these “social networking” tools are the cat’s meow, there’s probably someone who wishes that cat had stayed in the bag.

As with most new technologies, early adopters tend to be young, tech-savvy users—in other words, teenagers. And teens have been known to be—what’s the word?—inhospitable to those outside their cliques.

Finkel claims that she was branded as a carrier of AIDS and a participant in acts of bestiality. Also on the hook for the $3 mil are the parents of the students and Facebook.

A different kind of online forum is generating criticism of another type. RateMDs.com is a sort of clearinghouse for patients’ ratings of their physicians. (See “A Prescription for Silence.”) When the ratings are bad, the medicos get mad.

Many are now asking (if not re­quiring) patients to sign waivers say­ing they will not post comments on rating sites. It’s not clear whether the agreements are legally binding, but for members of Angie’s List, which began rating health care pro­viders in March 2008, they seem to be unpopular—only 3 percent say they would sign one.

A rising star in the so­cial network­ing universe is the service called Twitter. Limit­ing users to 140 characters per “tweet,” it allows them to enrapture “followers” by answering the ongoing question: “What are you doing now?”

It turns out that sometimes the answer to that question is, “I’m giv­ing my friends inside information about being a juror on this trial.”

Prosecutors and defense attor­neys alike have registered protests against jurors communicating with the outside world during trial. In March, an eight-week Florida drug trial end­ed in a mistrial after nine jurors admitted going online during the proceedings.

If this trend continues, one suspects it won’t be long before cross-examination is interrupted by an appearance from the pizza guy.

And finally, lest it seem that so­cial networks trouble only the non­famous, you might be relieved to find out that celebrities are not im­mune to Twitteresque contre­temps.

None other than singer/actress Courtney Love found herself on the receiving end of a libel lawsuit filed by her former fashion designer. Ac­cording to the suit, filed in March in Los Angeles Superior Court, Love engaged in “an obsessive and delusional crusade” on Twitter and other forums to destroy the de­signer’s reputation and livelihood.

All of which begs the question: What kind of place would the world be if we listened to the filter that’s (supposed to be) in our heads?

Stay tuned as technology continues to give you faster and easier ways to put your foot in your mouth.

Next:
How I Spent My ABA Day in Washington