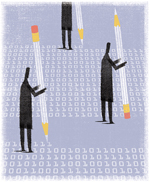 The release of Microsoft office 2010 gives us a good opportunity to re-evaluate how lawyers should use office software suites now and in the future. Should you stick with what you have, make an upgrade or, perhaps, change your approach to fit what you might really need?

It seems like every conversation with an IT person I’ve had lately about Office 2010 centers on the IT person’s belief that “word processing is word processing” and lawyers don’t need anything more than Office 2003, if even that.

My own bias is toward using the latest versions of programs. In fact, I’m writing this column in the Word 2010 beta. I need to stay current with technology developments to write and speak about them; however, I also like new versions for security and usability improvements, additional features and, usually, enhanced compatibility with documents sent to me by others.

But based on the statistics I’ve seen, the majority of lawyers still seem to be using Office 2003. Many of them are quite content and their firms are reluctant to spend real dollars to update software that seems to get the job done. Other firms have only recently upgraded to Office 2007 or might have that upgrade in the works. As a result, I do not expect to see a big rush to Office 2010 in 2010, even though it offers significant improvements to Office 2007 that lawyers will appreciate.

I want to reconsider the venerable office suite and invite you to think with me in some different ways about it.

First, let’s look at what Microsoft is offering us in Office 2010. Frankly, it looks a lot like 2007, with some nice design tweaks. The biggest change in Office 2007 was the “ribbon,” a new approach to menus and to grouping related features. The ribbon is still in Office 2010 and finally makes its way into Outlook.

The big changes in Office 2010 are usability improvements, additional collaboration features and online capabilities. There are also many small features that longtime users will like, but I do not see one “killer feature” that lawyers can use to persuade their skeptical IT and financial people.

Second, let’s look at all of the office suite alternatives: Microsoft is increasingly finding it is its own biggest competitor. Macintosh users have Apple’s iWork and the Mac version of Microsoft Office. The free Open Office suite has gotten a growing amount of attention. There is a new version of WordPerfect Office called X5 that touts enhanced online collaboration and the Mozilla Thunderbird e-mail client, due out soon. And there are now online office suites like Google Apps and Zoho. I regularly use Google Docs as well to collaborate on articles.

I’m not sure we’ve ever had so many good choices at appealing price points. Check out the comparison list on Wikipedia.

Third, let’s look at the central role an office suite plays for the average lawyer, who spends the bulk of his or her day in a word processing program and an e-mail program. A good number of lawyers use a presentation program. A small portion of lawyers use spreadsheet programs; but, for those who do, these programs are essential.

Here’s where lawyers might disagree with the IT people and the bean counters. If lawyers use programs as a central part of their practices, then improvements that make the programs more usable, more functional and less frustrating have a definite value. It might appear to be “just word processing” to others, but these are the software tools lawyers use to get their work done. Might it be time to focus some IT spending on improving the experience of lawyers?

It also makes sense to bring the right tools to the right people. It’s striking how quickly small businesses are adopting Google Apps where work product consists of simple documents or spreadsheets. If all you need is simple, why not use simple and inexpensive tools rather than full office software suites?

The recent focus on “cloud computing” suggests we are moving toward online software services. Office 2010 represents Microsoft’s biggest step in that direction. Google, with its Google Apps, has a big footprint in this category. I don’t think we’ll see Microsoft lose its dominant place anytime soon, but the office suite area is definitely changing.

I’ve long thought that Office 2007 was the version that really made sense for lawyers. Office 2010 improves Office 2007 and it will become my recommended version of Office for lawyers who use the application.

But the real question is becoming whether Office is the best office suite for the work that lawyers and legal staff do. 2010 is a great time to start answering that question.