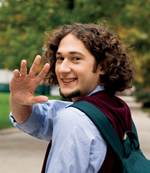 Each year, 150 or so of Northwestern’s 5,000 applicants turned down for first-year admission receive letters inviting them to apply again for “conditional acceptance” the following fall.

“The acceptance would be contingent upon your achieving a certain GPA or class rank during your first year of law school elsewhere,” says the letter, which is signed by the school’s assistant dean of admissions.

Deans of lower-tier law schools argue that such recruiting is pred­atory, allowing elite schools to poach their best students. Moreover, they claim the practice helps top schools boost revenues in their second- and third-year classes, while keeping up their LSAT and GPA averages—both significant com­ponents of U.S. News & World Report’s law school rankings.

Northwestern Dean David Van Zandt says that he understands the poaching charge, and that it’s “probably true.” But top-performing students who have proved themselves “should be entitled to transfer, and there’s no harm in us facilitating that,” says Van Zandt. “Chrysler and General Motors don’t agree not to poach each other’s customers.”

During the 2006-2007 academic year, the Chicago-based school—which was listed ninth in the 2008 U.S. News law school rankings—added 43 transfers to its 238-student first-year class. Other top-ranked schools that year had similar gains. At 14th-ranked Georgetown University Law Center, 93 students transferred in. UCLA School of Law, which ranked 16th on the U.S. News list, netted 31 transfers to its 323-student first-year class. Fifth-ranked NYU Law added 38 transfers to a class of 447.

It suggests to him the schools are gaming the rankings, but he admits that would be hard to prove.

“Because the ABA has only [collected] transfer numbers for the past couple of years, there can be no definitive proof of a trend over time,” Logan says.

The ABA Section of Legal Education and Admis­sions to the Bar accredits law schools and co-publishes with the Law School Admission Coun­cil an annual guide to ABA-approved law schools.

Hulett Askew, consultant to the section, says the ABA amended its annual law school questionnaire in 2006 to include data on transfer students. While Askew says he has heard these concerns from deans, he doesn’t believe there’s any way to correlate the statistics to prove the transfers are rankings-driven. And the le­gal education section can’t concern itself with the allegation unless an accreditation issue is at stake.

Some legal educators worry that such recruiting is becoming increasingly more aggressive. David Yellen, dean at the Loyola University Chicago School of Law, doesn’t regard it as evil, but he says it’s clearly driven by rankings.

While elite schools argue that transfer students benefit from “trading up,” Logan laments a ripple effect that begins with the brain drain on the origi­nal school, which reduces academic discussion and harms the bar passage rate. In addition, faculties lose research assistants, classmates lose friendships, and tuition increases are imposed to offset departing students. And at their new school, transfer students will find it tougher to forge relationships.

Northwestern’s Van Zandt disagrees: “I find that argument patronizing to a group of people who are going into a profession of judgment. These are smart people. Some transfers won’t work out, just like anything in life. But quite a few are advantaged.”

In “Transfers Bolster Elite Schools,” December, Northwestern University School of Law said it extends conditional second-year acceptance to 150 of the 5,000 applicants turned down for first-year admission. A representative for the law school now says it extends only 15 to 25 such conditional acceptances each year.