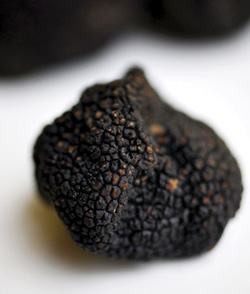 The root of the truffle kerfuffle. Photo by Travis Dove.

Truffles may fetch $800 per pound on the open market, but in North Carolina they may be better known for the legal fees they are generating.

A truffle kerfuffle began several years ago for farmer Franklin Garland, who sells specially inoculated trees that grow on their roots the highly prized black Perigord truffle and the Burgundy truffle. The tubers are said to induce a state of bliss in food connoisseurs, but the lawsuits they’ve generated are anything but rapturous.

Garland, who owns the Hillsborough, N.C.-based Garland Truffles, claims to have pioneered the art and science of truffle growing in the Western hemisphere. After he began selling his truffle-producing trees, he found a ready market, including fellow North Carolinian Susan Rice.

Garland says Rice, who owns the gourmet food business Black Diamond French Truffles, promised to buy some 20,000 truffle-bearing trees from him at a cost of $20 apiece. She planned to use the trees to create the nation’s largest commercial truffle farm, according to court documents.

After Rice allegedly breached the contract to buy the trees—Garland’s lawsuit claims she purchased trees from a competitor —Garland claimed that he could not resell all the trees he grew on her behalf once she made her intentions known.

Rice has countersued, claiming, among other things, that Garland failed to deliver the trees.

Don’t expect a settlement anytime soon. The trees may bear truffles before the two of them settle. An attempt at mediation has already failed. “These are people who care a great deal about what they are doing, and they have strong personalities,” says Michael W. Patrick, Garland’s Chapel Hill-based attorney.

Photo of Betty and Franklin Garland by Travis Dove.