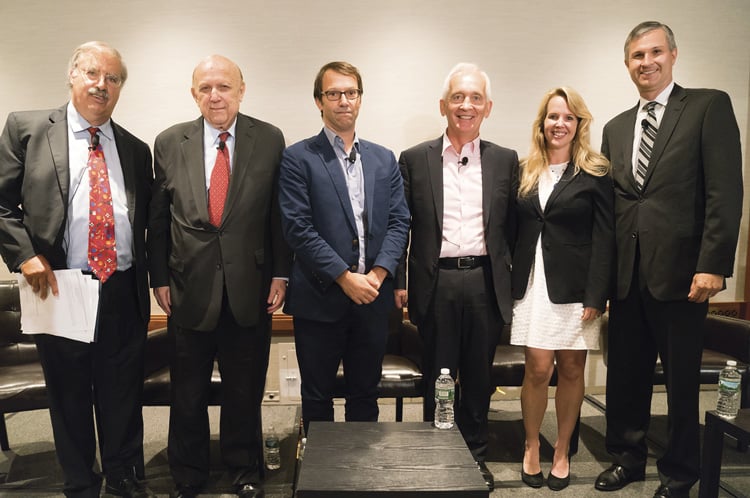 As president of the United States, what damage might Donald Trump do to the press, and what legal options do journalists have available to them to defend their speech? And how might the administration fight the leaks to the media that appear daily?

These were the foremost concerns for the panelists of “Trump v. the Press and the First Amendment: Fake News, Government Leak Investigations, Alleged Biased Media Coverage, Trump’s SLAPP Libel Suits and His Pledge to ‘Open Up the Libel Laws’—Will the First Amendment Survive?” at the ABA Annual Meeting in New York City. The Section of Litigation and the Forum on Communications Law sponsored the event.

Floyd Abrams, a partner at Cahill Gordon & Reindel and a longtime First Amendment lawyer, compared Trump’s attacks on the press to the kind of authoritarian language used by Juan Perón, a former president of Argentina, and by Recep Tayyip Erdogan, the president of Turkey.

“It can have significant antidemocratic results,” Abrams said.

If the Trump administration were to decide to use the Espionage Act of 1917 to pursue journalists for publishing information leaked to them, it is not at all clear what the outcome would be. Abrams said the text of the law is phrased very broadly, and there hasn’t been enough litigation against journalists for the case law to be clear.

“There remains a level of uncertainty,” he said. He sees possible defenses for journalists in the legislative history of the Espionage Act—although courts have been increasingly less likely to rely on that as opposed to the text of the bill—or in arguments that journalists had not acted to intentionally harm the United States or give aid to foreign powers. But the law “remains a ticking time bomb,” he said.

When it comes to Trump’s vow to tighten libel laws, none of the panelists gave it much credence. There are no federal libel laws, and Congress would have to agree to pass new legislation. In fact, there has been momentum in the opposite direction at the state level for passing what are called anti-SLAPP laws, intended to discourage “strategic lawsuits against public participation.”

According to the Media Law Resource Center, 28 states, the District of Columbia and Guam had adopted some form of anti-SLAPP legislation as of 2014.

One panelist who is concerned that U.S. libel standards and anti-SLAPP legislation might make the press too reckless was Tom Clare of Clare Locke. Clare has represented many plaintiffs in libel suits and recently was able to reach a settlement with Rolling Stone for his client Nicole Eramo, a former University of Virginia associate dean. Eramo had sued the magazine for defamation for the way it portrayed her in its retracted 2014 article about an alleged gang rape on the university’s campus.

Clare said that while he views the seminal libel case New York Times v. Sullivan as a good decision by the U.S. Supreme Court, the case law that has been built on top of that 1964 opinion has often unfairly prevented people who suffered real harm from being able to redress their grievances in court. He also worries that anti-SLAPP laws unfairly block plaintiffs from being able to conduct a reasonable amount of discovery to support their claims.