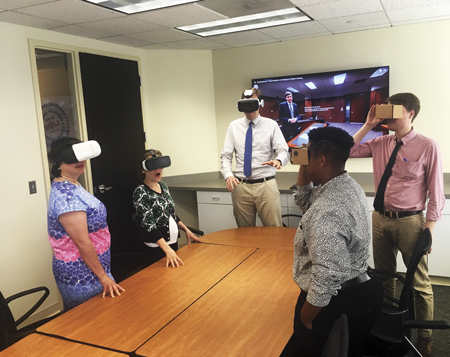 At a recent fundraiser for the Maryland Volunteer Lawyers Service, a spokeswoman for the organization roamed the March Madness-themed party with a virtual reality headset made of cardboard. She encouraged guests to place it over their eyes, transporting them into a 360-degree courtroom training experience, and eagerly awaited feedback. Did this perspective make it easier to fathom the experience of a pro bono attorney? Would it encourage you to join up?

Like many pro bono legal services, the MVLS faces a perennial shortage of volunteer attorneys, and affordable legal resources are scarce across the country. In 2016, the United States was ranked 94th in the world for the accessibility and affordability of civil justice, according to the World Justice Project. Community legal services pick up much of the slack.

But among an already-stretched pool of volunteers, MVLS staffers have observed even fewer are comfortable in court—especially newer attorneys.

“People shy away from volunteering if they think they might have to go in front of a judge for the hearing,” says William Buschur, a volunteer with the service and technology group co-chair in the Young Lawyers Section of the Maryland State Bar Association.

To take a stab at the problem, Matthew Stubenberg—the service’s IT director and the other tech group co-chair—teamed up with the section to create a virtual reality training series that he says demystifies the courtroom experience and entices newer, or courtroom-shy, attorneys to sign up. The trainings are designed to take attorneys “from zero to ready” for a range of cases they might encounter as volunteers. Buschur shot and edited the videos.

Now available on YouTube, the VR trainings show mock hearings in expungement, guardianship, family law and consumer protection courts. The videos can be downloaded onto a smartphone and slipped into Google Cardboard headsets, which are available for as low as $5 a pop. They can be handed out at conferences or mailed to volunteers, exposing new lawyers to pro bono opportunities.

“We may have 100 attorneys doing expungements, for example. Maybe 10 go to a hearing, but we only have five attorneys that are comfortable doing hearings,” says Stubenberg, who has also created an expungement assistance app.

Buschur notes that early in a legal career it can be difficult to get courtroom experience: “A lot of the time you’re at a big firm, at the bottom end of the totem pole. You’re lucky if you get to go into a courtroom for a live hearing.”

Speaking from his own experience as an MVLS volunteer, Buschur says, “it’s easy to run yourself through loops trying to think of what might happen at a hearing if you’ve never had one before. But it’s usually a lot simpler than they might think,” with some hearings lasting just a few minutes. 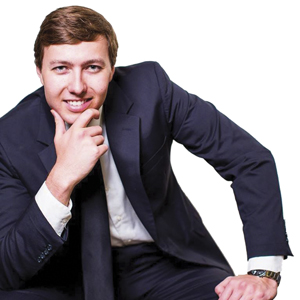 Stubenberg adds that, unlike 2D video, with VR “you have the freedom to look around and identify what’s important” in the courtroom from a lawyer’s perspective. He also wants volunteer lawyers “to feel like we have their back, that we’ve thought of everything” to prepare them for court—something that’s harder to achieve with pamphlets and run-of-the-mill training, he says.

The MVLS is the first organization to partner on the project, which is funded by the Young Lawyers Section. But it’s not intended solely for volunteers. The Maryland Office of the Public Defender is working with Stubenberg on its own set of VR training videos for new lawyers.

And the team has designs on expanding beyond Maryland. Stubenberg and Buschur have their sights set on the areas of law with the most need. These days, that’s the federal immigration docket.

“There’s a huge need for immigration attorneys pro bono. So we want to partner with an organization doing that kind of work,” Buschur says. “Right now, that is the goal.”

This article appeared in the August 2017 issue of the ABA Journal with the headline “Virtually Training Lawyers: Maryland uses a high-tech tool to recruit pro bono attorneys"