What judges really think about the phrase 'May it please the Court?' 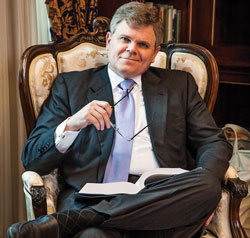 Photo of Bryan A. Garner by Teri Glanger.

It is often said that May it please the Court is an obligatory phrase at the outset of an oral argument—and that any other opener suggests the oral advocate is unknowledgeable or inexperienced. But is that so? Does the phrase really so please the courts that its absence displeases? I put the question to several judges, whose answers generally point to the phrase’s advisability.

But before considering their responses, let’s look at the history of the phrase. It can be traced in print back to the playwright Ben Jonson—Shakespeare’s contemporary—who used it in his 1601 comedy The Poetaster (about an atrocious poet) and again in a court scene in his 1606 comedy Volpone; or, the Fox. So the phrase seems to have been current among advocates in the early 17th century.

Victor Hugo used the phrase in The Hunchback of Notre Dame (1831)—or rather it appears in the English translation of 1834. In a gripping courtroom scene in a criminal case, the presiding judge admonishes: “Be brief.” The defense lawyer then states, arrestingly: “Since the prisoner has confessed the crime, I have but a few words to offer. In the Salic law there is this clause: ‘If a witch have eaten a man, and she be convicted of it, she shall pay a fine of 8,000 deniers, which make 200 sous in gold.’ May it please the court, then, to sentence my client to pay this fine.”

In American courts, May it please the Court was the most common opener throughout the 19th century. But there were variations. The great Daniel Webster’s characteristic phrasing was May it please your honors (recorded in both 1818 and 1848). The same was true of Benjamin R. Curtis, who served as a Supreme Court justice from 1851 to 1857. Joseph H. Choate, a celebrated Supreme Court advocate in the late 19th century, habitually opened with If the Court please.

In 1830, a New York lawyer gave this quaint account of his response to a judge’s query (“What is the plea?”): “ ‘May it please the court,’ replied I, opening out my brief and forming a circle in the crowd by the extension of both my arms to their utmost length, ‘my client is not guilty. The charge which is brought against him is one affecting him most deeply and which he considers it his duty to submit to a jury. I therefore’—and here I took up a book —‘according to the statute, demand a jury.’ ” Such a scene could hardly be imagined in a modern courtroom. Yet the age-old phrase persists.

What do today’s judges say?

Justice Nathan L. Hecht of the Texas Supreme Court conferred with his colleagues, who like the phrase but wouldn’t insist on it. He says, “I don’t think it’s legalese, though it is a formalism. An essential aspect of legalese, it seems to me, is that it is an inelegant or ineffective manner of communication. May it please the Court is not a statement, a real question or even a rhetorical question. It is not intended to obtain information or communicate the intent of the speaker; or if it is, then it frequently is hard to discern in what follows any thought of the speaker about actually pleasing the court.

“The introduction seems to me simply a historically acceptable way to begin,” Hecht continues. “What would lawyers say instead? Hi? Good morning—which is the most often-used alternative, as if the court session were any other meeting? What’s shakin’, Chiefie baby?”

Chief Judge Frank Easterbrook of the 7th U.S. Circuit Court of Appeals at Chicago notes that “all the words are simple ones—no law French—and it isn’t archaic.” He adds: “I don’t care whether a lawyer opens an oral argument with this phrase. When it appears in a brief or motion, which is often, it is a waste of space. It may help some lawyers get started; icebreakers have their place.”

Emphasizing the icebreaking function of the phrase, Judge Jon O. Newman of the 2nd Circuit at New York City points out that “sometimes it’s the only thing a lawyer says that doesn’t get immediately challenged.”

Extemporaneous innovations might often be effusive and embarrassingly so, according to Judge Danny J. Boggs of the Cincinnati-based 6th Circuit: “May it please the Court may be preferable to whatever intro people would make up—as when people tell me how proud they are to be there, how noble we are, etc. That doesn’t do as well.”

The consensus seems to be that it won’t really help, but it certainly can’t hurt. Judge Thomas M. Reavley of the 5th Circuit at New Orleans calls it an “accepted introduction and expression of respect for the court.” His colleague and wife, Judge Carolyn Dineen King, thinks of it as “a nice touch that gives the lawyer something automatic—no thinking involved—to come out with when he or she first stands up.” Chief Judge Alex Kozinski of the 9th Circuit at San Francisco says it’s “totally pointless, but largely harmless, so it’s a good way to get started.”

Another 9th Circuit judge, Susan Graber, says, “Its absence is always more notable than its presence, so I prefer lawyers saying May it please the Court.”

There are other issues about the phrase. How should it be delivered? Is it a statement or a question? How should it be printed—that is, which words are capitalized? These questions are easily answered. First, it should be delivered not as a question but as a statement, similar to May the force be with you or May the wind be always at your back. The inflection goes down, not up, at the end. And when printed, only the first and last words take capitals—May as the beginning of the sentence, and Court as a show of respect to the court one is addressing (however humble its jurisdiction may be).

In the mid-1990s, the clerk of the Supreme Court, William K. Suter, established the exceedingly useful Guide for Counsel, available on the court’s website. It directs counsel to use the invariable phrasing Mr. Chief Justice, and may it please the Court.

In her last term on the court in 2005, Suter tells me, Justice O’Connor presided. It was the first and (so far) only time that a woman has presided in the great chamber. Chief Justice William H. Rehnquist was ill and Justice John Paul Stevens absent. It was a nonargument day when decisions were announced and motions presented.

The lawyers asked for Suter’s advice on what salutation to use, and they followed his advice: “Justice O’Connor, and may it please the Court.”

Perhaps we could find something else to please the court—and the whole court. Four approaches seem possible.

• First, we might wait until a woman assumes the chiefship and then delete the reference to the chief justice, reverting to the time-honored May it please the Court. This seems hardly fair—changing the practice only after a woman has assumed the most august position in American law.

• Second, we might ditch Mr. Chief Justice now, before the issue arises, and go back to the most time-honored wording.

• Third, we might simply use Chief Justice itself as the form of address: Chief Justice, and may it please the Court. To my ear, the wording seems curt.

• Finally, we might revert to using the chief’s last name: Chief Justice [Blank], and may it please the Court.

So it looks as if the fourth solution will prevail in the end—if we’re wise enough to follow the sagacious advice of Justice Ginsburg.