What's the evidentiary standard for emojis? 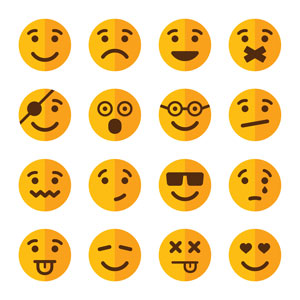 Shorthand has been around in one form or another since Xenophon described the trial of Socrates with papyrus and a feather. It’s a way to convey information in the shortest, easiest way possible.

Today, with keyboards and social media having supplanted handwriting as preferred methods of communication, shorthand often takes the form of what is known as the text-based emoticon, such as :) or the more widely used graphical symbol known as the emoji, which looks like [smiley face].

These symbols are typically used as ways to convey emotion [frowny, reddish face], though sometimes they function as realistic representations of objects [hourglass]. Many folks—especially the under-30 crowd—make heavy use of them in their text messages and social media postings (email is so last decade, you know). But should those symbols be interpreted as literal portrayals of the sender’s thoughts and intentions for purposes of criminal conviction? That’s the question that has been coming up in courtrooms over the last year or so, including one high-profile case.

In a trial that got underway in January 2015, Ross William Ulbricht (known online as Dread Pirate Roberts) was convicted of seven charges related to running the Internet marketplace of illicit goods known as Silk Road. As emails, chat logs and forum posts were read aloud by prosecutors, Ulbricht’s legal team argued the emoticons within those communiqués provided context and should be seen by jurors. Judge Katherine B. Forrest of the U.S. District Court for the Southern District of New York agreed and instructed prosecutors to mention the symbols from that point forward.

While the Silk Road trial was unfolding, New York City teen Osiris Aristy posted a message on Facebook that seemed to imply violence against police. And for emphasis, the 17-year-old added [policeman, three guns]. Three days later, on the basis of those emojis, he was arrested and charged with making a terrorist threat. Within a month, however, a grand jury declined to indict him and the charge was dropped.

Such symbols have figured in other cases across the country, from Elko, Nevada, to Baton Rouge, Louisiana. Defendants who post violent threats try to downplay those threats because they’re accompanied by something like [winking, tongue sticking out]. And prosecutors zero in on emojis of guns, knives and explosions as evidence of intent to commit mayhem.

In Pittsburgh, text messages sent by shooting victim Michael St. Clair in November 2014 led police to believe he was more than just a victim; they believe he was wounded during the commission of a crime. The messages seemed to indicate that St. Clair was intending to take part in a robbery, during which two men were killed. And the fact that they contained [man running], [explosion] and [gun] seemed to indicate that he was prepared to use violence. Partially based on that, St. Clair has been charged with criminal homicide and other offenses in what prosecutors—according to triblive.com—have called an “emoji-cide” case.

While emojis might not be central to the outcomes of these cases, they nevertheless represent a sort of new frontier for courts to grapple with. Should their meaning be considered so unequivocal that they can be entered into evidence?

This article originally appeared in the February 2016 issue of the ABA Journal with this headline: “‘Just Kidding’ ;) : What’s the evidentiary standard for social media symbols?”