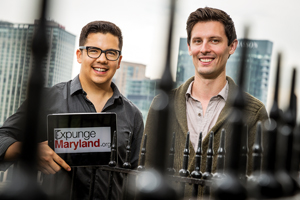 Photo of Jon Tippens and Jason Tashea by David Hills

In Maryland, as in any part of the world, people with checkered pasts are looking to wipe their slates clean. Baltimore lawyer Jason Tashea is hoping to make that process just a little easier.

Tashea, along with University of Maryland law student Jon Tippens, created ExpungeMaryland.org, a Web application to help people start to figure out whether their criminal records can be wiped away.

Getting a criminal record expunged is not easy in any state, and according to Tashea, most people have no idea which charges can be expunged or how the process works. While the Internet is chock-full of information, it's often of little help to most because the information is difficult to decipher and involves lengthy explanations of a complicated state statute.

ExpungeMaryland.org breaks down the process into more user-friendly chunks, telling visitors, for example, how to get a copy of their actual criminal records. It also provides a series of simply worded questions to help users discover whether charges filed against them are potentially expungeable, including queries about how old they were when charged, whether the criminal case occurred in Maryland and whether the individual was released without conviction. In addition, users are able to download expungement petitions and fee waivers directly from the website.

A beta version of ExpungeMaryland.org went live this summer. While similar tools have been created in a few jurisdictions, ExpungeMaryland .org is the first to provide a statewide service for expungement of charges filed against adults or youths charged as adults. As of August, the app had 184 visitors. Thirty-four of them got references to legal services providers.

"We want to increase awareness and use of expungement, and we also hope that by doing this we can also increase people's access to things like employment and housing," Tashea says.

The app is written in open source, making it easily replicable for other states, Tashea adds.

This article originally appeared in the November 2014 issue of the ABA Journal with this headline: "Wipe Out: New app helps people expunge their records."