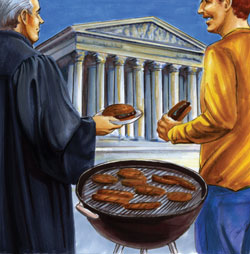 “When I realized I had made an error, I apologized, and she could not have been nicer about it.” The two began swapping emails, and Sotomayor invited Murphy to see her at the Supreme Court when Murphy was in Washington, D.C., for a conference.

Hearing about this friendly encounter prompted us to ask about your personal encounters with members of the high court. Here’s what some of you had to say:

“I live in Maine and Chief Justice John G. Roberts Jr. summers up here. A few years ago I was at a lobster pound with my son. He told me what he wanted to eat and I got in the long line. When I finally reached the counter, they were out of what my son wanted, but I didn’t want to leave the line to go back to the table because, as a former New Yorker, I knew the person behind me would just jump in and start ordering his stuff and I’d have to get back in the line. I turned and looked at my kid, turned back to the cashier—a total dilemma. Finally, the man behind me said: Go ahead, I’ll hold your place. I turned around with gratitude and thanked him—a family guy, couple of kids, wife. I went back to the table and got a new order from my kid, who said to me that the lady at the next table, who knew I was a lawyer, said I should shake the hand of the chief justice. I did when I returned to the line, and he introduced me to his family. Ah, Maine.”

“I ran into Justice Clarence Thomas at a barbecue about 10 years ago. We ended up talking about powerlifting. He liked lifting weights and could put up some decent numbers. Heck of a nice guy.”

“I met Justice Breyer at a book party for his second book on the Constitution. The justice spoke with me as if I were the only person in the room, and—when I mentioned a case I argued before him 18 years earlier in the 1st Circuit—he said graciously that he remembered the event. Finally, when he autographed my copy of his book, he asked me what I wanted him to inscribe.”

“In 1991 I was visiting Washington, D.C., as a tourist. I went to the Supreme Court just to see it. I was still in law school. I got on an elevator and didn’t pay attention. The elevator stops, I start walking, I practically knock Justice John Paul Stevens down getting on. It even took a few seconds to realize who it was (no bow tie), how I had gotten where I was (improperly it turns out), and that I was a young fool.”

“When I was an assistant U.S. attorney in my late 20s I ran into Justice William H. Rehnquist at the Eastern Airlines lounge at the Tampa International Airport. I think I said something like, ‘You wouldn’t happen to be the chief justice of the Supreme Court,’ to which he responded in the affirmative. He was very gracious and did not seem at all put off by my stupid question. However, the Secret Service agent standing nearby did not look too happy.”

“I met Justice Ruth Bader Ginsburg outside her chambers. I was an intern for a Senate committee. I went on what was to a be a regular tour of the court and somehow got included in a tour group of law professors. The guide took us ‘behind the scenes’ a bit, including a tour of the various offices. Justice Ginsburg was simply walking down the hall with a cup of tea in her hands. It took a moment to register because she just looked so … normal.”

“In 1981, I was visiting a friend who was clerking at the U.S. Supreme Court. As we walked through the hallway, we passed a short, white-haired man and exchanged hellos. My friend asked if I knew who that was, and I was embarrassed to admit that I had no idea. It was Chief Justice Warren Burger. In order to appear taller, he used to sit on a pillow in court to elevate himself above his peers.”