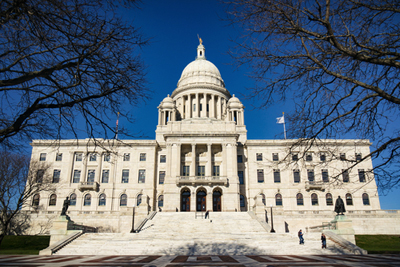 All three have recently resigned, the Journal reports. WPRI has stories here, here and here.

One of the lawyers was Gregory Hazian, senior legal counsel of the Rhode Island Executive Office of Health and Human Services. Hazian lost his right to practice law in January for failing to meet the state requirement for continuing legal education.

Gov. Gina Raimondo has asked the state attorney general to investigate potential criminal charges against Hazian after he was accused of blowing a May 23 deadline to appeal a court decision that could cost the state an estimated $24 million, the Providence Journal reports in a separate story. The case, brought by 59 state nursing homes, had challenged a Medicaid rate cut by the state. State lawyers are asking the Rhode Island Supreme Court to allow the appeal.

Another lawyer in Hazian’s agency is also unlicensed. Deputy chief legal counsel Gregory Madoian was removed from the master role of attorneys in 2016 for failing to register with the state supreme court.

A third unlicensed lawyer is Jennifer Roche, the chief legal counsel at the Rhode Island Department of Education. She is certified to practice law in Massachusetts and New Hampshire, but not Rhode Island. A spokeswoman said Roche is leaving because her family is moving out of state.

Education Department Assistant Commissioner Mary Ann Snider told the Providence Journal that Roche is a “strategic thinker” who has a supervisory role and doesn’t litigate. Officials knew Roche wasn’t licensed in the state when she was hired, officials said.

Roger Williams University law professor David Logan told the Journal that Rhode Island law “is very clear that a lawyer is practicing law even when he or she is not in a courtroom.”

However, Rhode Island ethics rules allow in-house lawyers to provide legal services in the state if they have a license in another jurisdiction and they work for a sophisticated entity that can monitor their work.