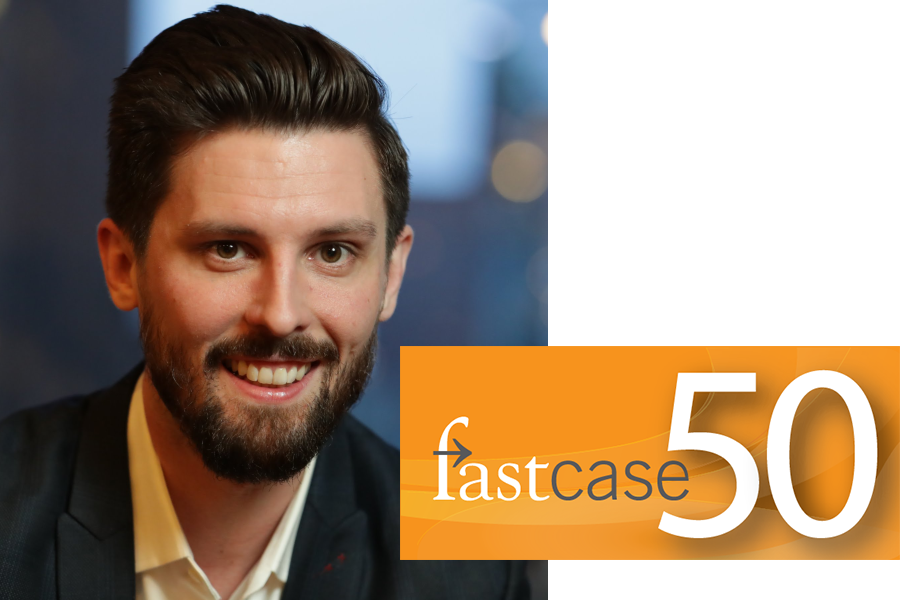 The ABA Journal is pleased to announce that Legal Affairs Writer Jason Tashea has been named to the 2019 Fastcase 50.

This is the ninth year Fastcase has shined a spotlight on a diverse group of 50 innovators and forward-thinking legal industry leaders. They will be honored this week during the 2019 American Association of Law Libraries Annual Meeting in Washington, D.C.

“Every part of the legal market is changing right now—from law school through every part of the practice,” said Fastcase CEO Ed Walters. “That change can be daunting or discouraging to many people. And that’s one reason that our team enjoys celebrating the accomplishments of the Fastcase 50. These are people who inspire us by their intelligence, creativity, and leadership. We hope they will inspire others as well, especially during a time of great change for the profession.”

Tashea says he’s happy and humbled to be part of this year’s list.

“As the access to justice gap continues to widen—86% low income Americans currently can’t access civil legal help—and technology confounds the constitutional rights of criminal defendants, it has never been more important for those in the legal profession to turn their attention to issues created and potentially ameliorated by technology,” he says.

Molly McDonough, the Journal’s editor and publisher, praised Tashea’s inclusion in this year’s list. “Jason is an exceptional legal affairs journalist, with a particular talent for breaking down complex subjects in compelling ways. This is critical for informing legal professionals and others about the benefits of technology and its drawbacks, especially in terms of how biased algorithms can threaten due process and the rule of law.”

Tashea, who joined the ABA Journal staff in 2017, focuses much of his writing on how technology and data affect the legal system, especially in the areas of criminal justice reform. He is also the current columnist for the Journal’s tech-focused column Law Scribbler.

His Fastcase 50 recognition notes that he curates the JusticeTech Download weekly newsletter, and is the founder of Justice Codes, a not-for-profit criminal justice technology consultancy. He has also helped develop technology tools for the Bronx Defenders, and the Mississippi Access to Justice Commission.

Tashea also was named this year to the Legal Services Corporation Emerging Leaders Conference, was a featured speaker on the topic of AI in criminal justice at Cyberweek at Tel Aviv University and is scheduled to speak at the IEEE Global Initiative on Ethics of Intelligent and Autonomous Systems and the European Law Observatory on New Technologies in Athens, Greece.

Tashea earned his JD from the University of Oregon and his bachelor’s degree from Linfield College.