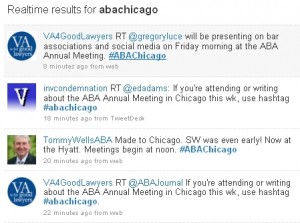 If you’re writing about the ABA Annual Meeting—taking place July 30 through Aug. 4 in Chicago—on Twitter, we encourage you to include the hash tag #abachicago in your tweets to make them easier for others to find.

What’s Twitter? Twitter is a free microblogging and social networking service that enables users to post 140-character messages—known as “tweets”—from any computer or Internet-capable Blackberry or cell phone. Lots of lawyers attending the meeting will be using it to communicate with others at the event.

Those not attending can following tweets about the Annual Meeting to take the pulse of the event. Learn more about Twitter on Wikipedia.

To follow the ABA Journal’s continuous coverage of the Meeting, subscribe to the Journal’s Twitter feed or link to our Web page devoted to the 2009 Annual Meeting.

The ABA’s official Twitter feed for the Annual Meeting is at twitter.com/ABAChicago.

And this year, ABA President Tommy Wells will also be tweeting during the meeting. You can follow him at twitter.com/TommyWellsABA.

Next:
ABA Board to Consider Membership Efforts at Annual Meeting