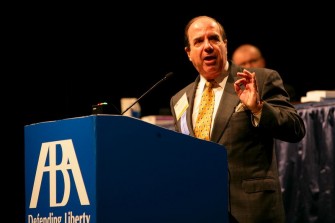 The ABA’s policy-making House of Delegates has concurred in a revision to the Standards for Approval of Law Schools relating to bar passage rates, making numerical pass rates a factor in accreditation of law schools by the Section of Legal Education and Admissions to the Bar.

The change is being made because the U.S. Department of Education—which since 1952 has designated the Legal Education Section as the accreditation body for law schools—requires a numerical standard, Jose Garcia-Pedrosa told the House.

Garcia-Pedrosa is Chief Operating Officer for the National Parkinson Foundation in Miami.

Without passage, the DOE won’t renew the ABA’s role as the accrediting agency later this year, he said.

The proposal says a law school’s bar passage rate will meet the ABA accreditation standard on the subject if it meets any of the following tests:

Victor M. Marquez, president of the Hispanic National Bar Association and a founder of the Marquez Law Group of San Francisco, said the change will disadvantage Hispanic and African-American law students. He suggested the ABA should ask for an extension of time from the DOE, rather than pass the proposed standard.