The ABA Journal congratulates its staff and contributors for several awards in the national and regional business-to-business journalism contest sponsored by the American Society of Business Publication Editors.

Winning a national award for best blog was the ABA Journal’s business of law blog, The New Normal, authored by Paul Lippe, of Legal OnRamp, and Patrick Lamb, a founding partner of Valorem, and their guests.

Lorelei Laird, a freelance writer for the ABA Journal, won a silver award for her September 2012 article, “Pricing Amy.”

In the art categories, Brenan Sharp, a senior designer and visual Web editor for the ABA Journal, took gold awards for his print design of the December 2012 layout for “King Coal’s Violent Reign”: 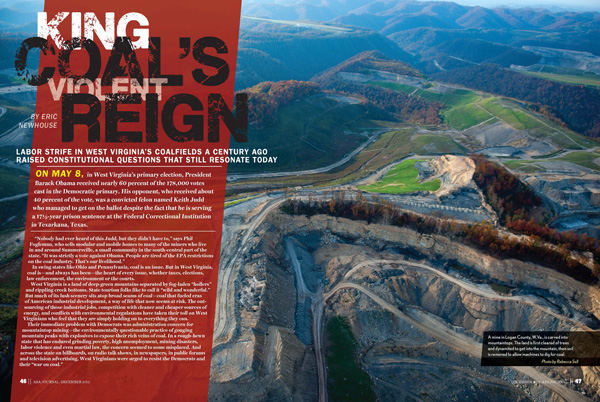 ABA Journal Design Director Bob Fernandez won gold awards for front cover illustrations for the February 2012 cover “Patriots Debate” and in collaboration with Eric Drooker for the August 2012 cover, “12 for the Stage.” Fernandez also won a bronze award for the computer-generated cover design of the May 2012 cover, “SUED.”