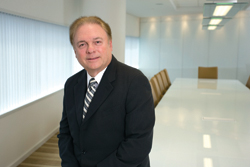 Florida attorney Stephen N. Zack has become the first Hispanic American to head the world’s largest voluntary professional association. He is the administrative partner at Boies, Schiller & Flexner’s Miami office. His one-year term as ABA President officially begins Tuesday, at the conclusion of the annual meeting.

Zack, the son of a Cuban mother and a father whose roots were in Russia, is fluent in Spanish and spent his childhood in Cuba. His family fled the Castro regime and settled in Miami.

“As a 14-year-old in 1961, when I was fleeing Cuba with my family, and we were taken off a plane by the G2—the Cuban equivalent of the KGB—and put in a cell, the last thing I could have imagined was a day like today,” Zack told the ABA’s 561-member House of Delegates.

Zack outlined four priorities for his one-year term. First is the preservation of the justice system. “When I was 14 in Cuba, the first knowledge we had that we would lose our liberty was the attacks on the judiciary,” he said. “We today are under the same attack against our justice system. We are fighting to establish the rule of law around the world, and we are in danger of losing it here in the United States.”

Zack noted that the Florida justice system accounts for just one-half of 1 percent of the state’s budget; in South Carolina, it’s just one-third of 1 percent. More than a third of American courts are considering implementing user fees, he said.

“Imagine that in America, to access your justice system, you have to pay for it,” he said.

Zack has appointed a 20-member task force on preservation of the justice system to be chaired by lawyers Ted Olson and David Boies. The task force will produce resolutions for consideration by the ABA House of Delegates.

Third, Zack is creating a commission on Hispanic legal rights and responsibilities to review the interaction of the legal system and the nation’s largest and fastest-growing minority group. “We must fully integrate Hispanics into our profession and our society,” he said.

Finally, Zack is urging courts and bar associations to prepare for disasters before they happen. After Hurricane Katrina, thousands of lawyers volunteered to go to Louisiana to help out, but the state’s courts turned them away, claiming it was the unauthorized practice of law. Since then, the courts of 18 states have passed a “Katrina rule” that would allow for such pro bono work during times of disaster. More should, Zack said.

And in a future time of man-made disaster, a U.S. President may seek to suspend habeas corpus, as presidents Lincoln and Roosevelt did. “Now is the time to consider what our response should be, before the events overtake us, because we know at those times our liberty is most fragile and at risk,” Zack said.