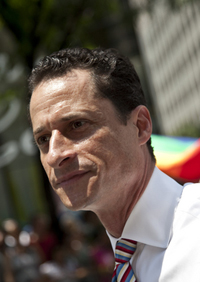 Former U.S. Rep. Anthony Weiner has been sentenced to 21 months in prison after pleading guilty to allegations that he sexted a 15-year-old girl.

U.S. District Judge Denise Cote of Manhattan sentenced Weiner on Monday, report the New York Times, BuzzFeed News and the Washington Post. Weiner’s lawyers had sought probation, while prosecutors sought a sentence of 21 to 27 months. Weiner had pleaded guilty in May to transferring obscene material to a minor.

Weiner told Cote, “I have a disease but I do not have an excuse.” He cried after the sentencing.

The case against the New York Democrat had led then FBI-director James Comey to reopen a review of some of Hillary Clinton’s emails that were found on Weiner’s computer. The emails belonged to Weiner’s wife, Clinton aide Huma Abedin. The FBI later said its review found nothing in the new discovery that warranted prosecution.