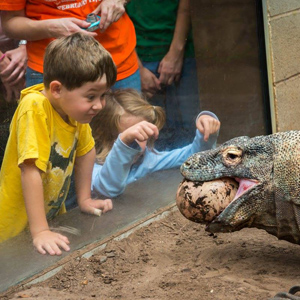 Can Texas zoos ban visitors from bringing guns on the property? Some zookeepers there hope so, but it may be unclear under recent state legislation.

The question centers around two new laws, the Texas Tribune reports. One allows licensed firearm holders to openly carry handguns, and the other penalizes improperly prohibiting firearms on government property.

Under both laws, private businesses have the right to ban guns from their establishments, as do amusement parks and educational institutions, according to the article. Some zoos argue that while they’re on public property, they’re managed by private foundations. There’s also the claim that zoos exist for educational purposes. Dallas Zoo explored the amusement park exception as well, the Tribune reports, but the law’s specifications for what constitutes an amusement park may be hard for zoos to meet.

“Given the mission of the zoo and the presence of hundreds of thousands of children on its campus, it is clear that guns and zoos simply do not mix,” Jackie Wallace, a spokesperson for the Houston Zoo, said in a press release. Officials there claim that their educational initiatives serve more than 200,000 children annually.

The Houston Zoo started getting attention about their stance in 2015, according to the Houston Chronicle, when they posted signs that stated handguns were not allowed on the property. The signs were removed in September 2015 after Texas Law Shield, which is described as a legal services firm for gun owners, threatened legal action. In November the signs were reposted, according to the article.

Edwin Walker, an attorney with Texas Law Shield, said that he has asked the state attorney general for a position on the policy. Walker in an interview with the Texas Tribune described the Houston Zoo’s position as “outrageous.”

“They are not regulated by Texas Education Agency, they are not part of any recognized school district or educational system, they do not issue a degree, they do not have degree plans. They are just simply a place where people go to learn things,” he said.

The question of how the law should be carried out may be difficult for various Texas industries. Fortune on Wednesday reported that at Texas Wal-Marts where alcohol is sold, managers must check gun permits when someone enters the story openly carrying a firearm. Law there prohibits unlicensed handguns where alcohol is sold, the article notes, and establishments who don’t follow the law risk losing their liquor licenses.