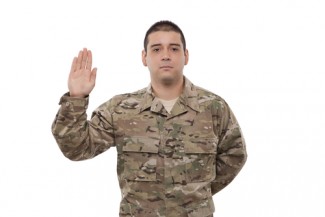 The American Humanist Association says it may sue on behalf of an atheist soldier who wasn’t allowed to re-enlist in the Air Force because he wouldn’t take an oath with the words “so help me God.”

The airman who is stationed at Creech Air Force Base in Nevada crossed out the phrase in his re-enlistment contract and was told in late August he could not re-enlist, according to an AHA press release. The Air Force Times has a story, noted in subsequent coverage by the Volokh Conspiracy and the Daily Beast.

The AHA sent a letter (PDF) to the Air Force Inspector General on behalf of the airman saying he is protected by the by the First Amendment and Article VI, which bars using a religious test as qualification to any office or public trust of the United States.

Air Force spokeswoman Rose Richeson told Air Force Times that the “so help me God” phrase in the oath is a statutory requirement. Air Force policy was changed in October 2013 to require the phrase. The prior policy said airmen could omit the words “if desired for personal reasons.”

Monica Miller, an attorney with the American Humanist Association’s Appignani Humanist Legal Center, told the Daily Beast “no one has been able to clearly articulate” the reason for the policy change.

“We think it’s a pretty straightforward issue,” Miller said. “Probably they were following policy, they just need to realize that the policy can’t be applied in an unconstitutional fashion.”