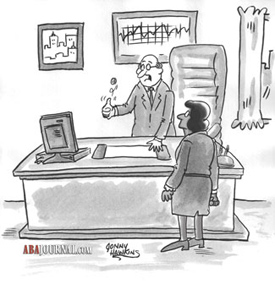 ABA Journal staffers have sifted through nearly 100 captions for this month’s cartoon. They’ve tossed a few coins to pick their favorites. Now it’s your turn to pick the one that will run in an upcoming issue of the magazine.

To help us pick a winner, vote in the cartoon poll for one of the below captions before Sunday, July 25:

• “It’s much cheaper than the jury consultant and still has a 50% chance of being right.”—submitted by Jonathan M. Stern of Washington, D.C.

• “This is as impartial as it gets.”—submitted by Lakisha, Davis of Orlando, Florida.