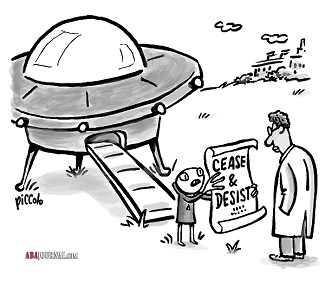 ABA Journal staffers have sifted through January cartoon contest entries and now it’s your turn to pick a favorite. The winning caption will appear with credit to the author in an upcoming issue of the magazine.

Vote in the cartoon poll for one of the below captions before Feb. 1:

• Take me to your lawyer.—submitted by Paul Agathen of Washington, Missouri

• “Have you no idea how strong your laser pointer is?”—submitted by Bruce Rand of Woodstock, Georgia

Please note that the January issue of the ABA Journal erroneously reran a cartoon from 2014. The correct cartoon for January ran online. Entries for the magazine cartoon will be judged separately.

Next:
9th Circuit blasts judge who ruled for rancher, boots him from grazing-rights case