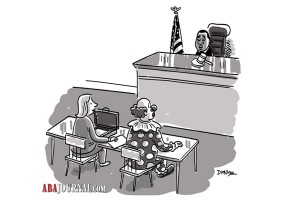 It’s your turn to pick the caption you think should appear with this month’s legal-themed cartoon.

No clowning around: The ABA Journal staffers had a hard time picking three favorites from more than 200 submissions.

Now it’s your turn to pick the caption that you think fits best. Simply vote in the cartoon poll for one of these captions before Dec. 29:

• “Sorry for the delay, your honor. My client’s 17 co-defendants are getting out of their car right now.”—submitted by Jennie Capellaro of Madison, Wisconsin

• “Now which one of you is the attorney?”—submitted by Robert C. Goodman Jr. of Norfolk, Virginia

• “It’s one thing to dress like Bozo, but it’s another thing to act like one.”—submitted by Pat Foley of Homer Glen, Illinois