Cartoon Poll: Which 10 Commandments cartoon caption is the best fit? 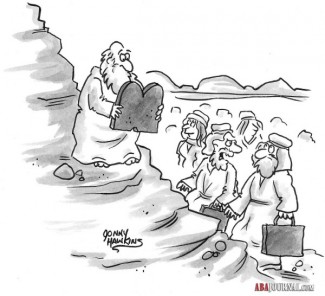 ABA Journal staffers have sifted through more than 230 cartoon captions. Now it’s your turn to pick this month’s winner.

• I get the impression the terms are not negotiable. —submitted by Thomas A. Greenwald of Plano, Texas

• “Look at him, he’s been on his tablet nonstop ever since we got Wi-Fi!” —submitted by Brandon Jean of West Hartford, Connecticut

Next:
Lawyer's suit seeks declaratory judgment that he shoved state treasurer in self-defense