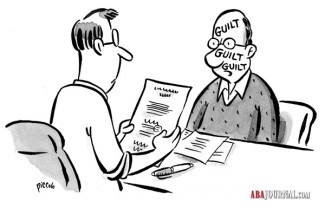 ABA Journal staff has selected their favorite submissions for the September legal-themed Cartoon Caption Contest. Now it’s your turn. Vote for your favorite before Sept. 29.

We had fewer entries for this month’s contest, but many gems in the mix of submitted captions.

The following are the three staff favorites. Now it’s your turn to pick which caption will accompany this cartoon in an upcoming issue of the ABA Journal:

• And Steve realized his trusty list of “What Not to Wear to Court” was incomplete after all.—submitted by Alex Winston of Knoxville, Tennessee

• “I need someone able to look beyond the prima facie aspects of my case.”—submitted by Scott Tredwell of Advance, North Carolina

• “You’ve got ‘retainer’ written all over your face.”—submitted by Lawrence F. Regan of Silver Spring, Maryland