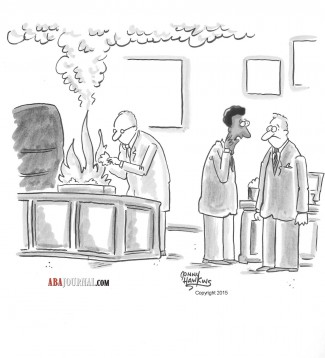 ABA Journal staffers have sifted through more than 150 entries for Jonny Hawkins’ cartoon featuring a burning legal issue. Now it’s your turn to pick your favorite among this month’s finalists.

Vote in the cartoon poll for one of the below captions by the end of the day on June 26:

• A simple “I don’t like your brief” would have sufficed.—submitted by Paul Van Lysebettens of Chicago, Illinois

• “Quick, get our biggest rainmaker!”—submitted by Andy Seiwert of Indianapolis, Indiana

• “I don’t think that’s what they meant by ‘going paperless’.”—submitted by Alan S. Levins of San Francisco, California

Voting period: Votes must be cast by 11:59 p.m. June 26. What’s the prize? Bragging rights. Plus, the winning caption and credit to the caption writer will appear in an upcoming issue of the ABA Journal.