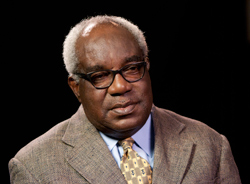 Chambers had suffered a heart attack in April, according to the Charlotte Observer, and was in declining health, the NAACP Legal Defense and Education Fund said in a statement cited by Reuters.

“Over the years,” the Charlotte Observer says, Chamber’s “enemies set his law office on fire, bombed his Charlotte home and his car. They also torched his father’s shop in his hometown of Mount Gilead. Yet Chambers … was never vindictive. And he never quit.” The story described Chambers as “soft-spoken but tenacious and unflappable.”

The Observer says Chambers decided he wanted to practice law when he was just 13 years old. His father, who owned a garage and general store, had planned to send Chambers to a private school for blacks, but he had to use the money set aside for education when a white customer refused to pay for parts and extensive repairs to an 18-wheeler. Chambers’ father asked the white lawyers in town to take his case, but they all turned him down. “That was the day Julius Chambers vowed to study law,” the story says.

Chambers, a former member of the ABA Journal Board of Editors, participated in an ABAJournal.com podcast in January on civil rights. In it, he recalled: “I wanted to go to a major school in North Carolina and at that time they were not admitting black students. So I couldn’t go to the schools, largely because of my race. And I never got over it, and I looked at job possibilities after I finished school and I saw various things that prohibited me from getting a job. I also wanted to do some things that I just couldn’t do because I was black. So I had a personal interest in getting involved in civil rights, and I was excited that we were able to succeed with a lot of those efforts.”