Lawyer faces charges after video shows him slapping another attorney 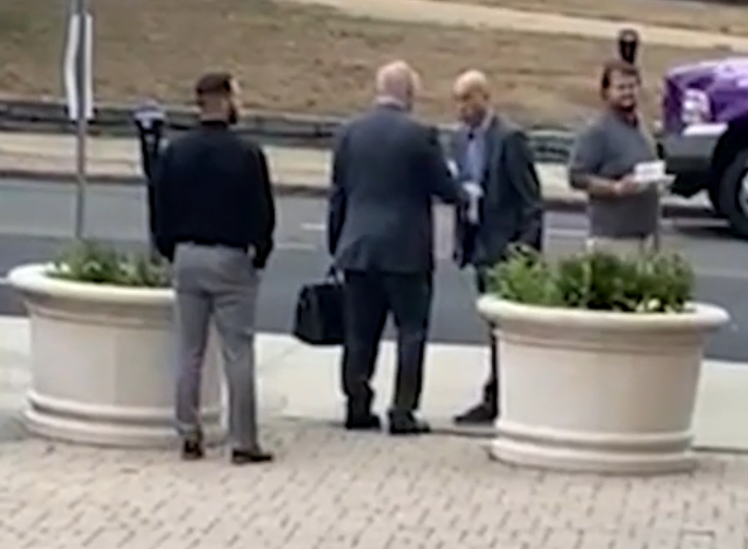 Updated: A Connecticut lawyer is facing criminal charges after a television viewer forwarded a video showing him slapping another person to News 12 Connecticut.

Naugatuck, Connecticut, lawyer Robert Serafinowicz, 43, was charged Sept. 7 with third-degree assault on an elderly person and breach of peace, report the Associated Press and the Connecticut Post.

Serafinowicz was recently in the news for his successful representation of the former president of a dog rescue agency who was accused of animal cruelty, according to the Connecticut Post.

But he also has two prior suspensions stemming from alleged ethics violations.

Serafinowicz told News 12 Connecticut in a statement that Gavin was trying to destroy his career and reputation.

Serafinowicz told the ABA Journal that his dispute with Gavin goes back 10 years, and it concerns Gavin’s defense of a judge whom Serafinowicz had criticized, leading to one of his suspensions.

Serafinowicz told the Journal that Gavin had been making snide remarks about the situation for years. He also said it was derogatory for Gavin to deny Serafinowicz’s statements about the judge, whom Serafinowicz thinks is unfit to sit on the bench.

The judge has pulled behind-the-scenes stunts through a group of friends to make Serafinowicz’s life miserable, Serafinowicz alleges.

“This was a pattern of harassment by a pathetic little goon squad over a period of 10 years,” Serafinowicz says.

Serafinowicz says he asked Gavin to apologize before he slapped him, and he forwarded an audio clip of the encounter obtained from News 12 Connecticut to back it up to the Journal.

A slapping sound can then be heard.

A person who answered the phone in Gavin’s office told the Journal that he had no comment.

Serafinowicz has two prior suspensions of differing lengths, according to Connecticut attorney ethics records. He was suspended for 120 days in 2015 for criticizing the judge and for 120 days, with all but 10 days stayed, in 2017.

The 120-day suspension was for statements of fact known to be false or made with reckless disregard for the truth, concerning the qualifications or integrity of the judge, and for engaging in conduct prejudicial to the administration of justice.

According to an appeals court ruling affirming the suspension, Serafinowicz made disparaging remarks to the media in February 2012 about the judge, who was presiding in one of his cases.

According to the opinion, Serafinowicz made these remarks about the judge: “The man’s a disgrace to the bench. He shouldn’t be sitting on the bench. It’s clear, very clear, that the man does not give people a fair shake; it’s clear that he plays favorites. There’s certain lawyers that he likes and certain lawyers that he doesn’t․ In case you didn’t notice, he didn’t like the fact that the media became involved in this because once the media becomes involved, his veil of secrecy, which allows judges to do whatever they want, all of a sudden goes away. … That man’s never tried a case in his life. Compare my trial record to his, his is zero and zero; look what mine is, not losing a case since 2007.”