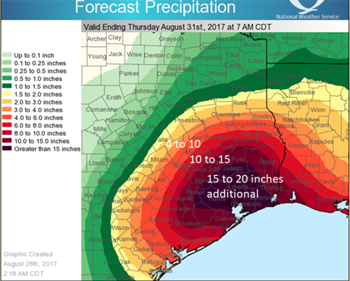 Updated: The reopening date is “unknown” for state and federal courts in Houston and Harris County, Texas, after the record rainfall in the wake of Hurricane Harvey caused unprecedented flooding.

The Texas Supreme Court and Court of Criminal Appeals issued an emergency order on Monday that allows for changes in deadlines and procedures in courts affected by Hurricane Harvey, the Texas Bar Blog reports.

The National Weather Service said there had been “epic and catastrophic flooding” in the areas of Galveston and Houston that could get worse with additional rain, the Houston Chronicle reports.

Texas Gov. Greg Abbott had encouraged residents to leave low-lying and coastal areas of the state, including Houston–advice that conflicted with that from local officials, including Houston Mayor Sylvester Turner and Harris County Judge Ed Emmett, the Washington Post reports.

On his Twitter feed, Emmett was posting official information, including retweets showing open shelter locations and a phone number for residents needing to be rescued and taken to the shelters. He was also warning residents not to get in the water. Emmett is chief executive officer for Harris County and is the director of county emergency management, according to the county website.

Houston officials who urged residents to stay home may have remembered that at least 60 of more than 100 deaths during Hurricane Rita in September 2005 were linked to the evacuation itself, the Post explains.

In an interview on Saturday, Emmett told the Austin American-Statesman there is no way there could be an evacuation of more than 4 million people in Harris County. “We don’t need people getting on the highways,” he said.

“We’ve been saying for days, this is a rain event, this is not a hurricane,” Emmett added. “People think hurricane and they think evacuation, and that doesn’t apply to us.”

In advance of the hurricane, Emmett had warned about online hysteria and spoke with a lawyer whose email address was being used to say that officials believed Harvey could be far worse than initial estimates.

The office of Texas Attorney General Ken Paxton, meanwhile operated a consumer protection hotline throughout the weekend to field complaints about price gouging, according to an online statement. The office also issued a warning about scam contractors offering help rebuilding.