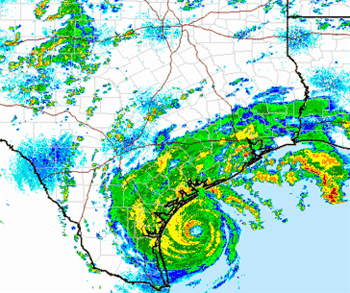 A screenshot from the National Weather Service early Friday evening showing Hurricane Harvey in the Gulf of Mexico.

Updated: Several courts have closed as Hurricane Harvey approached the Texas coast and intensified into a Category 4 storm, CNN reports.

State appeals courts in San Antonio, Beaumont, Corpus Christi and Edinburgh were also closed, as were courts in several counties, according to a Texas courts website. Some courts shut down on Thursday and others on Friday.

Several judges had issued evacuation orders ahead of the storm, including those in San Patricio and Matagorda counties, and a judge who ordered evacuation of some parts of Brazoria County, according to the Corpus Christi Caller-Times, KTRK and KHOU.

Mandatory evacuations require certain industries, such as hospitals, to alter operations, and that is why officials are cautious about issuing the orders, Nueces County Judge Loyd Neal told the Caller-Times.

The storm, meanwhile, led to circulation of an online rumor on Thursday, attributed to a Sugar Land lawyer’s email address, that said officials believed Harvey could be far worse than initial estimates, the Houston Chronicle reports.

Judge Ed Emmett of Harris County was among the officials who warned about online hysteria. Emmett said he spoke with the lawyer and told him to leave emergency warnings to the experts.

The lawyer was identified as Ross Bale. A representative from his law firm told the Chronicle the email was not accurate, but would not say if it had been entirely fabricated.

Another lawyer was preparing for the hurricane in another way. On Friday, a website for the Lane Law Firm offered help for those with insurance claims related to natural disasters.

Updated at 6:21 p.m. Friday with hurricane now a Category 4 storm.